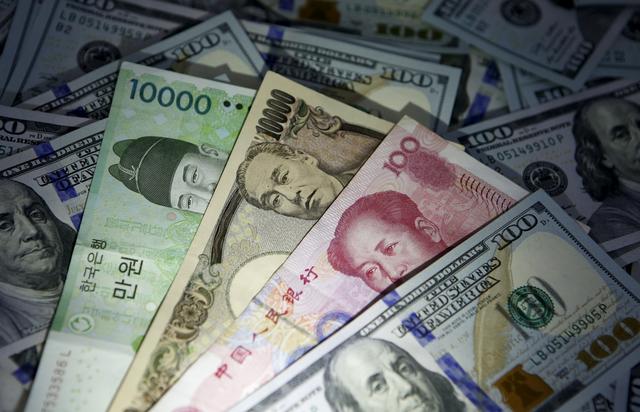 The yen gained slightly and the yuan slipped on Monday as investors nervously awaited U.S.-China talks this week for signs of whether the two sides can de-escalate or end their punishing trade war.

Risk appetite soured noticeably after Bloomberg reported that Chinese officials are signalling they are increasingly reluctant to agree to a broad deal pursued by U.S. President Donald Trump.

“Nothing is yet in the bag and optimism on trade has proved time and again to be misplaced,” said Rob Carnell, Asia-Pacific chief economist at ING.

The Japanese yen, regarded as a safe haven by virtue of Japan’s status as the world’s biggest creditor, edged up 0.1 per cent to 106.79 per dollar.

The Chinese yuan, the currency most exposed to trade-war tensions, fell more than 0.3 per cent to 7.1356 per dollar in offshore trade.

There was no onshore trading as Monday is the last day of China’s long holiday break for its national day.

Other trade-exposed currencies such as the Australian dollar and the Korean won also fell on doubts that much will be achieved at the trade negotiations.

Deputy-level meetings will be held on Monday and Tuesday, with top-level talks scheduled for Thursday and Friday, when Chinese Vice Premier Liu He meets U.S. Trade Representative Robert Lighthizer and Treasury Secretary Steven Mnuchin in Washington.

Global markets have been on a roller coaster ride this year as hopes for a deal have waxed and waned, while weak economic data in Europe, the United States and China, have added to evidence that the tensions are dragging on global trade and growth.

The jitters knocked the dollar from a two-year high last week, and it remained subdued on Monday.

Against a basket of major currencies, it was steady at 98.818 – almost a percentage point below its week-ago peak.

Signals from both sides in the lead-up to the trade talks have been mixed.

Trump last month delayed hiking levies on 250 billion dollars worth of Chinese imports from Oct. 1 to Oct. 15, “as a gesture of good will,” while China has again begun purchasing U.S agricultural goods.

But administration sources late in September also said the U.S. was considering imposing restrictions on investing in Chinese companies.

“The odds remain low for a trade deal,” analysts at DBS Bank in Singapore said in an emailed note.

“Washington wants to get the whole deal done but Beijing is unwilling to do so without the U.S. rolling back tariffs.”

Sterling was little changed at 1.2325 dollar, with uncertainties over Brexit keeping many investors on the sideline.

With only a few weeks until UK’s scheduled exit from the European Union on Oct. 31, British Prime Minister Boris Johnson is seeking significant changes to how the contentious issue of the Irish border is dealt with.

The European Union and Ireland said last week that his proposals were unlikely to yield a deal.