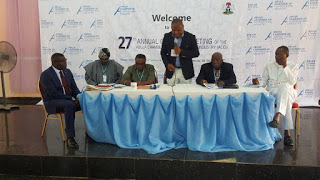 Prince Adetokunbo Kayode (SAN) has
assumed office as the New President of Abuja Chamber of Commerce and Industry
with chief Chris Ndibe also elected into the fifteen man council of the
chamber.
Prince Kayode, until his assumption of
office was the first Deputy President of the chamber to Barr. Tony Ejinkeonye.
Following the already established succession process, he succeeded Tony
Ejinkeonye who completed his 3-years term in office.
Prince Kayode holds Bachelor of law
degree from the University of Lagos and was counsel to the federal Government,
the People’s Democratic Party and the independent Electoral commission. He was
a Minister of Culture and Tourism, Labour and Productivity, Defence, and Attorney
General of the Federation.
At the Annual General Meeting (AGM) of
the Chamber which took place in Abuja, the legal luminary said he was
overwhelmed at the show of solidarity extended to him by Council, Executive,
members, partners, management and staff of the chamber during the years he
served as the First Deputy President pointing out that he will use the wealth
of experience gathered from his track record of private legal practice, public
service as well as the key roles he has played in the Organized Private Sector (OPS)
to elevate the Chamber to enviable heights.
At the same occasion, the Executive
Secretary of African Free Zone Association and the Chairman/CEO of Carlcon
Group, Chief Chris Ndibe was elected member of the council of the chamber.
Chief Chris Ndibe holds a First and Master’s
Degree from University of Nigeria, Nsukka with a second Master’s from University of
Abuja. He worked and retired as a General Manager of Nigeria Export Processing
Zones Authority before setting up his own businesses. He is a Free Zones
Consultant and publisher of the first two books on Free Trade Zone in the
country.
He also promised to bring his wealth of
experience in Public Service and business, especially in International Trade
Promotion, to the affairs of the chamber.

﻿Naira exchanges at N359 to dollar