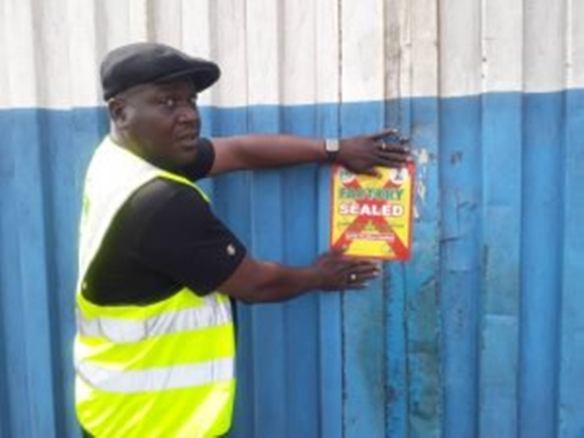 The Standards Organisation of Nigeria (SON) has sealed 13 steel factories across the nation for standards infractions.

The Chairman SON Task Force on Steel, Mr Enebi Onucheyo, said the companies located in Lagos, Ogun, Osun, Abia and Edo States were shut until further notice following a nationwide market surveillance carried out by the SON Task Force between November 2019 and January 2020.

He said samples of various steel products were obtained from the open market as well as the facilities of the companies during the surveillance period.

According to him, because of SON’s classification of steel bars as life-endangering products,  the Nigeria Industrial Standards (NIS) provides for unique identification marks for every locally manufactured or imported steel bars for easy traceability.

“Laboratory tests and analysis carried out on the samples revealed that most of them failed to meet the minimum requirements for diameter and mass per meter as provided in the Nigeria Industrial Standard (NIS 117:2004).

“These are critical parameters in the standard for reinforcement bars for concrete,” he said.

Enebi said the shut down exercise followed earlier warnings to all the steel manufacturing companies after observed infractions with directives to ensure strict compliance with the requirements of the NIS 117:2004.

The Task Force Chairman disclosed that some of the companies were found to have tampered with products earlier placed on hold by SON in their facilities while an unregistered identification mark “GE” was discovered in one of the products sampled.

He stressed that the exercise would be a continuous one in furtherance of the SON commitment to protect Nigerian consumers from the dangers associated with substandard and life-endangering products in view of the incessant collapse of buildings and structures across the country.

Enebi said the exercise was also aimed at ensuring that Nigerian consumers get optimum value for their hard earned money.

Strict enforcement of conformity to the requirements of the Nigeria Industrial Standards would according to him, facilitate export, while also preventing dumping into Nigerian Markets.

Itakpe-Warri rail kicks off after 30 years

The Government of Uganda promotes oil and gas projects at Africa...