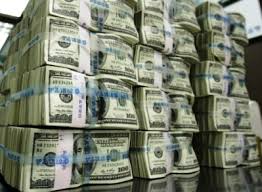 The bank made its expectations known in a statement on Thursday.

It cited big gains from its mountain of foreign bonds and stocks bought to dampen the value of the safe-haven Swiss franc.

The bank said that based on preliminary figures, it had made a profit of around 40 billion Swiss francs from its foreign currency positions and a valuation gain of 6.9 billion francs on its gold holdings.