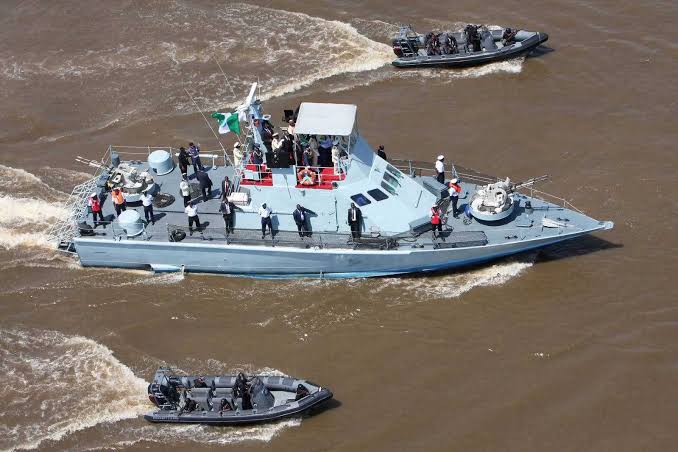 For a week, recently, Nigeria’s territorial waters enjoyed the protection of the navies of the world. The United States, Portugal and Morocco deployed some of their best combat vessels to participate in the 10th edition of the multi-national sea manoeuvre, code-named Exercise Obangame Express 2019.

The exercise, which was conducted in phases within the territorial waters of the participating nations, saw African navies simulate on how to counter security problems arising in the Gulf of Guinea.

The Nigerian phase of Exercise Obangame Express started on March 14 and ended on March 22, Nigerian Navy Ship Unity and NNS Centenary, Prosperity, Karadua, Nguru, Ekulu, Sagbama, Calabar, Rima, Ugwu and Mira and two helicopters participated in the exercise, alongside frigates from the US, Portugal and Morocco. The Nigerian Air Force also deployed maritime patrol aircraft to participate in the exercise.

The vessels sailed into Nigerian waters, and the ships performing several exercises with the purpose of creating realistic scenarios that reflect past piracy incidents whereby a hijacked vessel would transit from one territory to another.

Within the last few years, the world navies have focused on maritime security at the Gulf of Guinea, especially with incessant attacks on vessels and invasion of merchant vessels and hostage taking. A 2016 statistics by the International Maritime Bureau said it accounted for more than 50 per cent of sea-related crimes.

Indeed, the report by the IMB said that there were 53 reported attacks on ships in the Gulf of Guinea in 2016. Out of these, 36 were said to have occurred within Nigeria’s maritime domain.

Maritime operations centres, during the exercise were challenged to recognise these illicit acts appropriately and share with other MOCs. Additionally, the exercise tested the capacity of each individual maritime force to patrol theirm exclusive economic zones (EEZs) and detect and prosecute illegal activity accordingly.

According to the Chief of Naval Staff, Vice Admiral Ibok Ibas, the region’s economic activities rely largely on the safe and lawful use of West African coastal waters, which is why Obangame Express is such an important exercise.

The US buttressed that point by explaining that the skilful participation reinforced the fact that maritime security was a collective effort.

The navy said the essence was to enhance cooperation, detection capabilities, and capability to respond when a distress call rang out from a ship.

Over the years, Obangame Express, it was learnt, has proved successful at increasing partner nations’ capabilities.

The officer in tactical command of the exercise, Commodore Dickson Olisamunogor, said:  “In the past, we’ve had multiple examples of real-world applications when African nations have redirected military ships conducting training during the exercise to handle real-world events. We consistently see the training objectives reinforced as countries intercepted the suspect ships, collected evidence, and turned everything over to the authorities at shore.”

In the recent past, sea criminals traversing the waterways between Nigeria and Benin Republic had terrorised the countries, mounting blockades and preventing legitimate sea business that promotes economic growth.

Recent efforts by the Navy had dislodged the sea criminals and opened up the routes for legitimate maritime business to thrive.

For instance, fishing trawlers owners can now heave a sigh of relief, as the waterways have been made calm for legitimate fishing to thrive, especially in consideration of the fact that for a period, between 2005 and 2006, fishing trawlers had a hectic time combating sea robbers who swooped on them intermittently and stole their catch.

Apart from fishing, Nigeria’s economic mainstay is oil, and a large percentage of Nigeria’s oil had been stolen by thieves who frequently swooped on the facilities.

The Nigerian National Petroleum Corporation (NNPC) had earlier in the year revealed that at an average price of $97.59 per barrel, Nigeria lost $3.9 billion (N858 billion) between January 2013 and April 2015 to pipeline vandals and crude oil thieves.

Crude oil theft, alongside militancy, according to the Nigerian Navy, constitutes a major inhibitor to the socio-economic development of the Niger Delta, particularly, and Nigeria in general. As a result of this, responsibility towards the area has been largely neglected by administrations, organisations and companies.

Admiral Ibas, in his address, said the exercise had been beneficial to the Nigerian Navy and Nigeria in general.

For instance, the naval chief said the service arrested more than 80 vessels in the last three years for various maritime offences, including oil theft, by applying the lessons learnt from Obangame Express.

His words: “Within the past three years, over 80 errant vessels have been arrested for various acts of illegality. MT Tecne and MT Nipal were caught in the act of stealing crude oil loading facilities in 2017 and 2018, respectively.

“Suffice it to state that the navy arrested a total of 30 vessels in 2018 for forms of illegality in the nation’s maritime domain.

“This indicates on the face value a downward trend when compared with 37 and 45 arrests recorded in 2016 and 2017, respectively.”

He said the arrests had served as a deterrent and helped to support the huge national dependence on the maritime economy: “With the benefit of this exercise now, which has further sharpened our skills, we look forward to even greater achievements.”

Admiral Ibas said Exercise Obangame Express was organised to foster regional cooperation and intelligence-sharing among the Gulf of Guinea navies as well as other friendly navies towards tackling cross-border banditry and other maritime criminalities.

Said the naval chief: “In this regard, the exercise aims at working out each participating country’s capabilities in maritime domain awareness, implementation of regional maritime agreements and interoperability of African, European, Atlantic, and US militaries and agencies towards improving maritime safety and security in the Gulf of Guinea.

“It also creates a platform for the navy to practice the operationalisation of the harmonised standard operation procedures for arrest, detention and prosecution of criminal vessel in our waters,” he said.

Ibas expressed the hope that each participating country would build on the experiences gained during the 2019 edition of Obangame Express, urging the countries to sustain the tempo for subsequent operations within the region.