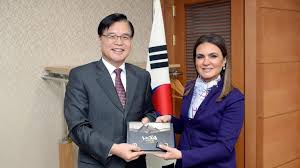 Egypt and South Korea have signed a memorandum of understanding (MoU) to boost investment relations and to increase joint investments.
The memorandum was signed by Egypt’s Minister of Investment Sahar Nasr and Head of General Authority for Investments Mohsen Adel with the CEO of Korea Trade-Investment Promotion Agency (KOTRA) during the Egyptian officials’ visit to South Korea’s Capital Seoul.
The MoU aims at establishing a practical framework to enhance the bilateral cooperation, expertise exchange, and to boost the business climate to help in implementing development objectives in both countries, in addition to establishing joint investment projects and holding conferences and seminars that target investors.
It also stipulated that both countries will exchange laws and regulations and policies related to investment climate in each of them to ease investment and activate joint projects. It also stressed that both countries will cooperate to remove obstacles that face growth and investment increase.
The Egyptian Minister agreed with Head of KOTRA on a working plan to support investment cooperation between both parties which guarantees increasing Korean investments in Egypt, and the expansion on investment projects especially in the Suez Canal Economic Zone (SCZone) and infrastructure sectors, besides, small and medium enterprises and feeding industries of car manufactures.
On Feb. 26, Nasr called on Korean companies to expand their investments in Egypt, clarifying that Korean investments do not reflect the distinguished level of political and economic relations between both countries.
Nasr elaborated that there are only 164 Korean companies in Egypt, most of which are distributed among the manufacturing, services and construction sectors.
Source