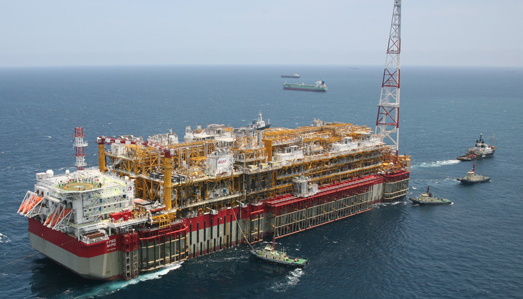 Nigeria’s Industry, Trade and Investment minister Okechukwu Enelamah has promised to amicable resolve the ongoing dispute between Samsung Heavy Industries Nigeria (SHI) and the management of Lagos Deep Offshore Logistics, (LADOL).
Enelamah made the promise when the South Korean Ambassador to Nigeria, Maj.-Gen. In-tae Lee, paid him a courtesy visit in Abuja on Thursday.
Enelamah said that all parties in the dispute were being engaged by the Nigerian Export Processing Zones Authority (NEPZA), saying that he believed the engagement process would restore normalcy.
“We will work with you, Samsung, NEPZA and all the parties involved to resolve this amicably.
“We have an excellent relationship with South Korea and we will like to continue that successful resolution of problems,’’ he said.
Enelamah assured the ambassador that he was on the same page with him, the need to revise the agreement to meet contemporary needs.
“It is time to revise the agreement.”
Earlier, Lee had sought the intervention of the Minister in the dispute.
“Korean companies that are eager to invest in Nigeria are watching the dispute closely and it is in the best interest of both countries to get this behind us,’’ he said.
Lee said that Samsung was trying to resolve the court action launched by LADOL.
He also sought the minister’s contribution to the ongoing review of the 1998 Bilateral Investment Treaty signed by both countries.
LADOL, operators of the Egina Floating Production Storage and Offloading recently sacked SHI from the free zone over expiry of its operating licence.
The Managing Director of LADOL, Dr Amy Jadesinmi, said that Samsung failed to meet the minimum standard required to qualify for an Operating License in a Free Zone.
“Their license has expired without renewal and Samsung’s Sublease Agreement has been duly terminated,’’ Jadesinmi said.
Samsung Heavy Industries is one of the world largest shipbuilders, through its joint venture with LADOL; it has invested 300 million to help build a floating oil platform for Total’s Egina oil field.
Total describes the field as one of its most ambitious ultra-deep offshore projects which is expected to produce about 200,000 barrels of oil per day.The figure represents about 10 per cent of Nigeria’s total capacity.