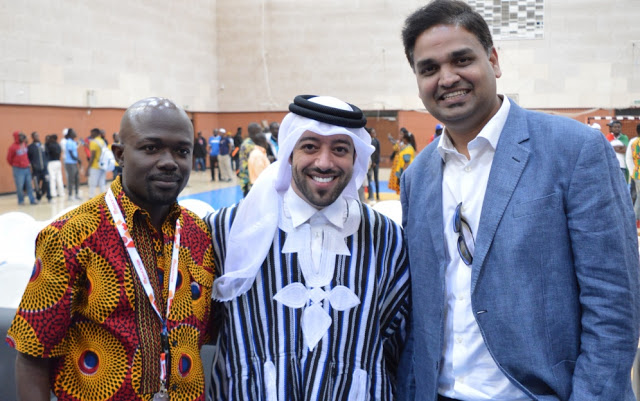 Qatar is setting up Umm Al Houl, the country’s first Free Zone, to fast track investment to boost its economy.
It is located next to Hamad International Port, designed to receive local and foreign investors during the first quarter of 2019.
Qatar’s Minister of State and Chairman of the Free Zones Authority H E Ahmed bin Mohammed Al Sayed, said at a session held in the framework of the second day of the International Product Exhibition and Conference (IPEC 2018).
He said the foreign investor will not be a rival to the local private sector, but will be a starting point for communication between Qatar and the global market.
It would provide more opportunities for the local investor and the Qatari private sector.
He noted that the second Free Zone, Abu
Fontas, which is located next to Hamad International Airport and has a
gate on the airport to facilitate cargo operations and associated
matters, will also be launched next year and will
be advanced in terms of the technology used.
He said that the Cabinet added some areas
to the Free Zones law, including Musheireb which will be very important
because of its location and advanced infrastructure.
He revealed that the Free Zones Authority
is engaged in early negotiations with some major international
companies to reach joint ventures in those areas, stressing that some of
these companies will be operating from Qatar.
The Chairman of the Free Zones Authority
explained that the economic zones aim at providing a level of an
economic security in terms of free flow of goods to the state and the
local market, in addition to supporting the process
of economic diversification by strengthening the GDP and attracting
investors from around the world to add to the process of economic
diversification.
He noted that the country is interested
in certain sectors in these free zones, especially logistics, because of
their location near the port and the airport, adding that there will be
sites to store gold, jewelry and expensive
antiques, as well as food storage and re-export of food through the
port or airport.
He added that spare parts are also an
important sector targeted in those areas, which will benefit the local
sector, in addition to the pharmaceutical industries, where the
Authority plans to make Qatar a headquarters for this
vital industry, especially in the presence of Qatar Airways which
provides fast and specialized transport lines for the industry, noting
that Qatar ranked first in the field of drug transfer.
The Minister said that the Authority is
also interested in another strategy related to the gas and petroleum
derivatives. He noted that there is an opportunity to engage in many
industries, such as petrochemicals, plastics and
others, in these Zones.
He noted that the Free Zones Authority is
engaged in talks with many bodies in the State, including Qatar
Petroleum, in order to encourage the Qatari private sector or the
foreign companies to invest in this field, and to make
these zones a base for exports in the future.
The idea of the free zone was part of Qatar’s economic development plans.

He explained that the process of the economic construction and economic development in Qatar passed through several phases.

In the 1990s, the focus was on the oil
and gas sector, where many state institutions have been built,
benefiting from oil and gas revenues.

The development of gas revenues have also been invested.

Meanwhile, the beginning of this century
witnessed the planning of many infrastructure projects, especially in
the education sector and service institutions such as the airport and
the port.

This was reflected on the country’s economy to grow from $8 billion in 1996 to $200 billion this year.
He believed that there are three
advantages that make Qatar attractive to invest in free zones, at the
forefront the availability of natural resources, including energy.

The second advantage is the availability
of strong financial efficiency, which has enabled Qatar to overcome the
unjust siege, and affirmed its ability to support any large-scale
projects. Thirdly, Qatar enjoys significant infrastructure
leverages that make it an attractive platform for local and
international investments.
In addition, the strong economic
fundamentals pushed Qatar towards a knowledge-based economy, and despite
the difficult challenges, the wise leadership of the state is able to
achieve this goal, he underlined, noting that Qatar
occupies many advanced ranks in many international economic
classifications.
He highlighted the importance of Qatar’s
geographical location, noting that the world’s longest point takes only
about 18 days by ships, making Qatar a strategic location in the world.
He invited foreign investors to invest in
the Free Zones in Qatar, because it will an investment with the State
of Qatar represented by government companies and institutions, as well
as the Qatari private sector.
He reviewed the privileges that investors
will enjoy if they invest in the free zones, including full ownership
of companies, freedom of capital, entry and direct contact with the port
and the airport, and the existence of a special
system of employment and large facilities, in addition to the absence
of fees in the property and no taxes on income, whether for persons or
companies for a period of twenty years renewable.
Referring to another advantage, HE Ahmed
bin Mohammed Al Sayed said that the State has also set up a development
fund to support some small companies, whether local or international, to
invest in the free zone.

He noted that the free zones have a high
regulatory environment as they will be subject to Qatar International
Court, and that the registration system will be far from bureaucracy and
will follow the best international standards
in this regard.