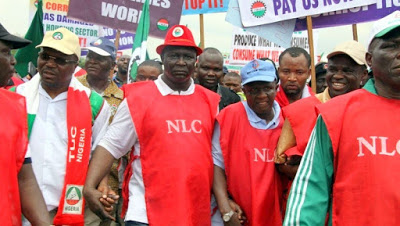 The nationwide strike initiated by the
organised labour commenced in Nigeria on Thursday with some public and
private sector workers staying out of work.
The 14-day warning strike was called to force Nigerian government to increase the current minimum wage.
The strike which will affect workers in
federal, 36 states and federal capital territory (FCT) and the local
governments was call by the organised labour to kick against the current
minimum wage which was put in place five years
ago.
The industrial action was called by the
Nigeria Labour Congress (NLC), Trade Union Congress (TUC) and United
Labour Congress (ULC).
The organised labour had also on Sept. 12
issued the Federal Government a 14-day ultimatum insisting that the
Tripartite Committee on the new National Minimum Wage should conclude
its work within the stipulated time frame.
Workers from all sectors of the economy are to comply with the seven days nationwide warning strike which has begun.
The negotiation for a new
minimum wage had been on for about a year with the government
negotiation team coming up with excuses, especially placing the delay in
the process on the states.
The Tripartite Committee meeting called
to avert the planned strike ended in a deadlock on Wednesday but the
labour minister, Mr. Chris Ngige, said the meeting was shifted to Oct.
4.
Mr Ayuba Wabba, President, Nigeria Labour
Congress (NLC), accused the Federal Government of stalling the
negotiation by failing to mention a figure as a new minimum wage for
workers.
According to Wabba, the industrial action
is in compliance with the decision of the various organs of the
organised labour, which endorsed the 14-day ultimatum served on the
Federal Government by member of the unions who were
part of the negotiation committee.
“The labour further mandated its leadership to take all necessary steps to
ensure compliance with the warning strike in the first instance.
“This is to compel the government to reconvene the meeting of the committee in order to bring it to a logical conclusion.
“In compliance with this
mandate, all workers in the public and private sectors at all levels
across the country have been directed to join the strike.
“Industrial unions, state
councils, all workers organisation and our civil society allies have
been directed to step up mobilisation of their members,” he said.
He also said that public
and private institutions, offices, banks, schools, public and private
business premises including filling stations are to remain shut till
further notice.
Wabba said that all those
who mean well for the country and want to see to the success of the
action should cooperate with labour, saying that the action would remain
in force until further
directive are given.
The NLC president noted that the justification for the new national minimum wage cannot be over argued.
“We do believe that the reasons governors
find it difficult to pay the national minimum wage are lack of
political will, high level of corruption, excessive cost of governance,
white elephants projects and among others.
“In any case, we are commending the
governors that have indicated their readiness to pay the new national
minimum wage and we advise those who are not prepared to pay to go back
to their state and tell the workers in their state
that they would not pay.
“We, therefore, find it necessary to
caution against any attempt by government at any level to blackmail
workers or/and their unions because we have been patient, considerate
and patriotic.
“Indeed government had to commend workers
and their union for waiting patiently for two years before commencing
negotiations for a new National Minimum wage.
“We advise that our disposition should not be taken for granted,’’ he said.
The National Minimum Wage Committee was inaugurated in November 2017 and started sitting in March 2018.

The minister reported that the meeting
with the organised labour on Wednesday was in fact successful as both
the Federal Government team led by the Minister of Labour and Employment
and the leadership of the organised Labour agreed
to reconvene the meeting of the National Minimum Wage Committee on
Thursaday, October 4, 2018.