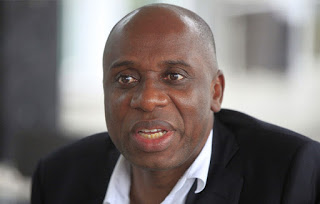 Nigeria has developed trade support infrastructure to boost trade with other countries, transport minister Rotimi Amaechi has said.
Amaechi made this known at the opening of a two-day Sub-Regional Workshop and Joint Standing Committee Meeting of the Union of African Shippers’ Council in Abuja.
The Sub-regional Workshop being hosted by Nigeria is with the theme “Port Concession in West and Central Africa: Impact on Economies of Member States”.
Amaechi said that the infrastructure included functional railways, roads, establishment of Inland Dry Ports and Truck Transit Parks across Nigeria.
He stated that these infrastructure have been put in place in order to bring shipping closer to service users in the hinterland.
The minister noted that President Muhammadu Buhari in January commissioned the Kaduna Inland Dry Port as Port of Origin and Destination which was now operational.
He said that Shippers in the North-West Geopolitical Zone were already using it for their trade needs.
Amaechi called on landlocked countries to take advantage of the Kaduna Dry Port which was targeted at providing services to such countries for the carriage of transit goods through Nigerian Seaports.
The Minister stressed the fact that high freight rates, arbitrary imposition of surcharges remained key issues hindering the development of international trade in West and Central Africa.
He, however, noted that it required collective responsibility of stakeholders to proffer lasting solutions to tackling these arbitrary and unjustifiable costs.
Amaechi urged the participants to thoroughly examine and evaluate the performance and impact of port concessions on the economies of the sub-region, implementation of World Trade Organization (WTO) and Trade Facilitation Agreement (TFA).
He urged them to also look at the issues relating to port operations as well as Sea-link project which are key to the effective realization of the sub-regional maritime goals.
Amaechi further called on the participants to look at important issues that would be raised at the workshop with a view to advising governments of the member States on appropriate regulations and policies.
He added that such advice would help nation governments in realising the laudable goals of the sub-regional Maritime industry.
Also at the occasion, Alhaji Mai-Mala Buni, Chairman, Governing Council of the Nigerian Shippers’ Council, stated that the workshop marked an important milestone for the Union of African Shippers’ Councils (UASC).
He said that it was an important milestone in the pursuit of effective and efficient trade and transportation for sustainable economic development in the sub-region.
Buni stressed that the UASC Joint Committee Meeting at the workshop would be used for developing strategies for the negotiation of freight rates and other conditions of shipment of goods carried by sea.
He enjoined participants to arrive at far-reaching resolutions that would be adopted towards efficiency at ports and to maximise full benefits of port concession.
Buni explained that these benefits would be achieved by taking advantage of the enormous potentials of the regional maritime industry.