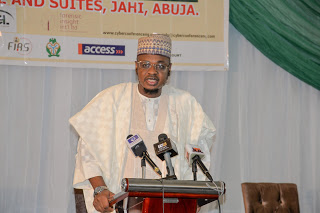 Nigeria has committed to be in the forefront of the digital transformation through its roadmap strategy that would trigger rapid economy growth.
Mr. Ali Pantami, Director General, National Information Technology Developmental Agency (NITDA) has said that the agency was driving the digital transformation.
Pantami made this known at the 9th edition of the eWorld conference 2018, Lagos in his presentation titled ‘NITDA’s Role in Digital Transformation’.
Pantami who was represented by Mrs Chioma Okee-Aguguo, Head, South West Zonal Office said that the digital transformation involved the integration of digital technologies into every sphere of the national economy which is why the roadmap was based on seven pillars.
According to him, the seven pillars were Information Technology Regulation, Capacity Building, Digital Job Creation, Local Content Development and Promotion, Government Digital Services, Cyber Security and Digital Inclusion.
He said that contrary to views on regulation, regulation provides a level playing ground that was required for the ICT industry to support in the digital transformation of the country.
”As part of our activities in this area, we have strengthened our role in the clearance of all government funded ICT projects.
”We have embarked on this clearance process in order to harmonize the implementation of IT projects within MDAs.
”Provide value-for-money for all projects funded by the government, avoid undue duplication, reduce the cost of implementing IT projects in Nigeria and ensure that the IT projects are sustainable,” he said.
The DG said that the agency had succeeded in saving the Federal Government billions of naira and have significantly improved the likelihood of success of these projects.
He said that NITDA has also assisted state government to develop the IT Policies and Strategic Plans, as a way of building their capacity to regulate and develop their ICT sectors, in their areas of strength.
According to him, in addition to these, we are ensuring that all sovereign data, and data regulated and hosted by the Government and MDAs are repatriated and hosted in Nigeria.
He said as part of the transformation process that the agency was involved in capacity building through scholarship offered at the PHD and master level to improve expertise and provide quality personnel at workplaces.
”We live in an era of disruptive technologies and technologies like Internet of Things, Cloud Computing, Block Chain and Big Data Analytics will define the future of the sector.
”We have partnered with the industry to train a critical mass of Nigerians in these areas.
”With digital transformation comes a transformation of the workplace.
”The skills and types of jobs of today are very likely to be antiquated tomorrow.
”It is necessary for us to have the foresight to begin the transformation of the workplace.”
He said that this was one of the reasons the agency identified Digital Job Creation as one of the seven pillars and establishing Digital Job Creation Centres (DJCC) across the country.
According to him, these centres empower users to set up businesses that incorporate cutting edge digital technologies.
”We want these centres to be triggers for the development of jobs that can thrive in this Fourth Industrial Revolution.
”Jobs that evolve with the needs of the citizens and take advantage of cutting edge technologies are being entrenched.
”The media industry is a very dynamic one and we have provided some of the latest media and editing software at the DJCC.
”This will enable users of the Centre to create new streams of businesses for the benefit of our national economy,” he said.
He however identified rapid growth in the number of cybercriminals and the increased sophistication of cybercrimes as some of the negative effects of digital transformation.
Pantami said that through NITDA pillar on cybersecurity the agency was tackling these threats and ensuring the safety of Nigerians in cyberspace.
He also said that digital inclusion pillar ensured the ability to include all strata of society in the nation’s digital transformation efforts.
According to him, We have programs that have included the persons living with disability, the prison inmates, women and girls, to mention a few.
NITDA was established to implement the Nigerian Information Technology Policy and co-ordinate general IT development in the country.