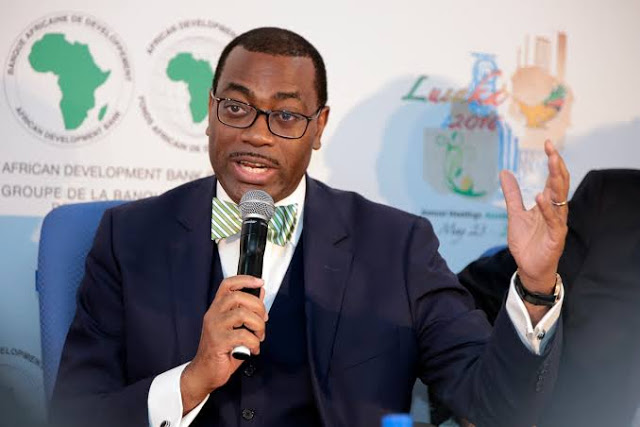 African Development Bank has asked
Canadian investors to pour into the continent, seizing advantage of
numerous investment opportunities and advised that it is time to
“change the lens through which Africa is perceived’’.
Dr.  Akinwumi Adesina,
President of AfDB made the call at a meeting with 80 leading
representatives of the Canada-Africa Chamber of Commerce in Toronto.
Promoting the Bank’s upcoming Africa
Investment Forum (AIF), scheduled for 7th to 9th November 2018 in
Johannesburg, South Africa, Adesina said, “Canada must not be missing at
Africa’s investment table.

“It is time to change the lens through
which Africa is perceived and to make clear distinctions between
perceived and real risks.”
The forum will bring together global
private capital and investment funds, sovereign wealth funds and the
private sector, for what is primarily being billed as a transactional
marketplace to bridge Africa’s US$68 – US$170 billion
infrastructure gap.
Stella Kilonzo, Senior Director of the
Africa Investment Forum; Timothy Turner, African Development Bank Group
Chief Risk Officer; Garreth Bloor, Managing Director, Glenheim Venture
Capital; Chris Clubb, Managing Director, Convergence
Blended Finance; Hakan Gunay, Senior Director of Finance, Skypower
Global, were among panelists
discussing investment and blended finance options in Africa at the event.
Addressing participants, Bank Executive
Director, David Stevenson explained that the Forum was “about deals and
getting things done and not a talk shop.”
Adesina, who is leading a high-level
delegation alongside Stevenson, Executive Director for Canada, China,
South Korea, Kuwait and Turkey, also met with Reeta Roy, President/CEO
of the MasterCard Foundation, to discuss synergies
for supporting youth employment and access to finance for women
entrepreneurs in Africa.
Earlier in Ottawa on Tuesday, Adesina
announced a US$1 billion synthetic securitization transaction at
Canada’s National Press Theater.
Although securitization is routine for
commercial banks, it is cutting-edge for development finance
institutions. The African Development Bank is the first Multi-Lateral
Development Bank (MDB) to use this game-changing innovative
financing mechanism. Room2Run, structured as an impact investment, will
enable the Bank to increase its lending to spur economic development
and social progress across the continent.
“Africa has the most promise, the
greatest natural resources, and the world’s youngest population. But we
also have the world’s most persistent infrastructure deficits. The
African Development Bank has the strategy to address
these infrastructure finance gaps—and Room2Run gives us the capacity to
make it happen,” Adesina said.
The landmark transaction was concluded with the Mariner Investment Group and Africa50.
At Global Affairs Canada (GAC), Adesina
exchanged views with Diane Jacovella, Deputy Minister of International
Development and Leslie E. Norton, Assistant Deputy Minister, Sub-Saharan
Africa Branch at Global Affairs.
The two parties explored areas for further partnership between
the Bank and Canada, including support for the Bank’s Affirmative
Finance Action for Women in Africa (AFAWA) initiative.
In a keynote address at the Global
Affairs Canada in Ottawa on Africa’s economic situation, President,
Adesina said, “Some ask the question whether the Africa rising story is
over. Well I don’t think Africa was ever down.”
Adesina told partners and employees of
Global Affairs, “The continent is not different from other parts of the
world that pass through episodes of growth spurts and dips. The
narrative on Africa should not be determined outside
of Africa. Africa must control its own narrative,” he noted.
The event was hosted by David Morisson, Canada’s Deputy Minister of Foreign Affairs.
Later, meeting with African ambassadors,
the Bank President commended Canada’s leadership role in helping advance
Africa’s economic agenda. He acknowledged the ambassadors’ collective
commitment and support in promoting Africa
as an investment destination of choice.
Adesina wrapped up the Ottawa stop with a
bilateral meeting with Jim Carr, Canada’s Minister of Internal Trade
Diversification, where he again made the case for increased investment
on the continent and urged Canada to look to
Africa as a new trade destination in line with its diversification
agenda.