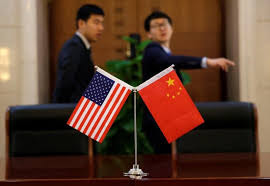 China has warned United States if it implements any new tariff measures as threatened by President Donald Trump.
China’s commerce ministry warned as the world’s two biggest economies remain locked in an intensifying trade war.
Global markets were on edge after Trump threatened fresh tariffs on another $200 billion in Chinese imports.
“If the United States, regardless of
opposition, adopts any new tariff measures, China will be forced to roll
out necessary retaliatory measures,” ministry spokesman Gao Feng said.
China will closely monitor the impact
from any fresh tariffs and adopt strong measures to help Chinese or
foreign firms operating in China to overcome difficulties, said Gao.
The Trump administration is ready to move
ahead with a next round of tariffs after a public comment period ends
at midnight in Washington on Thursday, but the timing is uncertain,
people familiar with the administration’s plans
told Reuters.
The new duties will start to hit consumer
products directly, including furniture, lighting products, tires,
bicycles and car seats for babies.
China and the United States have already
slapped tit-for-tat tariffs on $50 billion of each other’s goods,
spooking financial markets in recent months as investors and policy
makers worried the bitter trade war could derail global
growth.
Trump is demanding Beijing improve market
access and intellectual property protections for U.S. companies, cut
industrial subsidies and slash a $375 billion trade gap.
Markets fear any fresh U.S. duties on
Chinese imports will mark a major escalation in the trade dispute
between the world’s two economic giants, potentially causing significant
drag on global business investment, trade and growth.
In August, China unveiled a proposed list
of retaliatory tariffs on $60 billion of U.S. goods ranging from
liquefied natural gas to certain types of aircraft, in response to the
U.S. measures.
Trump said on Wednesday that the United
States was not yet ready to come to an agreement over trade disputes
with China but he said talks would continue.