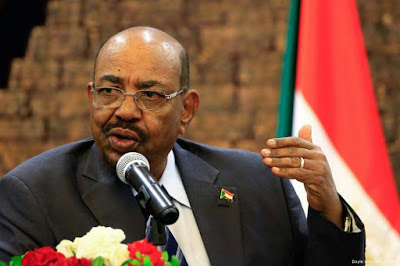 Khartoum — WHAT
should have been a celebration of Africa’s largest free-trade zone has
turned to a spat over human rights after Sudanese “war criminal” Omar
al-Bashir was given pride of place next to Djibouti president Ismaïl
Guelleh.
The Djibouti free-trade zone — on one of the world’s busiest shipping lanes — was inaugurated on Thursday 5 July.
In 2009, the
International Criminal Court (ICC) at the Hague issued an arrest warrant
for al-Bashir, claiming he had overseen acts of “murder, extermination,
torture and rape”, along with “three counts of genocide”.
The allegations stem from a civil war in the Darfur region.
Any member country of the Rome Statute that set up the ICC is required to arrest Mr al-Bashir on sight.
The European Union issued a statement noting “with regret” that Djibouti “did not surrender president al-Bashir”, to The Hague.
The Court confirmed that al-Bashir is deemed to be “at large” and a fugitive from justice.
Djibouti is a
member of the ICC, though human-rights groups have accused President
Guelleh of dubious elections and persecuting the opposition. Since
independence from France in 1977, the country’s only two leaders have
been Mr Guelleh and his uncle who died in 1999.
The United States
ambassador to Djibouti, Larry André, also attended the event. Two years
ago, when al-Bashir joined the inauguration of Ugandan president Yoweri
Museveni, the US ambassador to Kampala walked out of the room.
Mr André is a career diplomat and respected as an Africa expert having served in Mauritania, Tanzania, Kenya and Sierra Leone
In Khartoum, newspapers opposed to the government were quick to condemn the latest breach.
“Djibouti is a
member of the Rome Statute,” wrote the Sudan Tribune, “and therefore
obliged to comply with arrest warrants the ICC issues, even for
incumbent heads of state.”
In 2015, al-Bashir
was harassed on a trip to South Africa and had to leave the country in
secret after human-rights groups tried to detain him.
But in Djibouti
there was no effort to hide his presence and the official press kit
included a photograph of al-Bashir and Guelleh seated together.
In Washington, the
founding chairman of Genocide Watch, Professor Gregory Stanton, said it
was “an outrage” that a person wanted by the ICC should travel to a
member country without being arrested.
“This is how crimes
against humanity are normalised,” he said. “When someone who has a
warrant from The Hague can travel freely, the world is shrugging its
shoulders.
“The big problem
with genocide is what we call bystanders: those who do nothing to either
stop the crime, or bring the accused to justice. That’s what we saw in
Djibouti.”
Dr. Stanton said he was “especially disappointed” that the American ambassador attended the event.
“The US is not a
state-party to the Rome Statute, but since the 1990s it has taken a
zero-tolerance approach to war criminals,” he said.
“I think it’s time
for Congress to reaffirm its commitment to this. Our ambassadors
represent the President of the United States, and should not be in the
same space as someone charged with genocide.”
The ceremony
overlapped with a China-Africa trade mission attended by several
ministers from Beijing. China has become the largest lender to Djibouti
with some economists warning that loans had escalated beyond the
country’s ability to repay.
Mr Guelleh made
headlines recently when he issued a decree seizing control of a
container port near the new trade zone, cancelling a contract with Dubai
firm DP World. The company has taken the matter to a commercial court
in London for arbitration, denying the president’s claim that they were
in breach of the deal.
There has been
debate in Congress over whether the same power of decree could be used
to cancel the lease on a US military base near the harbour though Mr
Guelleh says he remains allied to Washington.
culled:by Raji Bashir for cajnewsafrica

Only exporting countries will benefit from AFCFTA–Expert