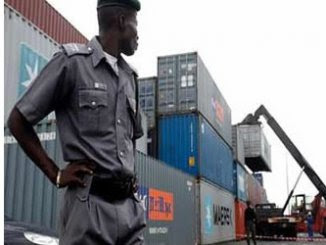 The Nigeria Customs Service (NCS), Federal Operations Unit (FOU)
Zone ‘C’, Owerri, South West of the Country, says it seized Tramadol and
other goods with Duty Paid Value (DPV) of N379.29 million between March and
June.
The Comptroller Ahmed Azarewa, made this known on Thursday when
he briefed newsmen on activities of the unit in the zone.
Azarewa said that the items seized included illicit drugs, bags
of rice, used tyres, second hand clothing, and vehicles of different makes
confiscated along the Benin- Owerri –Port Harcourt axis.
Giving further breakdown of the items, the comptroller said that
the service confiscated a Mack Truck with 582 cartons of Tramadol, and 258
cartons of Tygracildenafil with a DPA of N21.462 million.
According to him, the Unit also confiscated a MAN Diesel Truck
with 98 cartons of Ibamol drug (50 packs per carton), 22 cartons of 200mg
Tramadol, 15 cartons of 225 mg Tramadol and 250 mg (50 packs) of Tramadol worth
N11.862 million.
“The NCS also seized an unmarked Mercedes Benz truck with 327
bags of Cannabis Sativa valued at N11.445 million.’’
Both the tramadol and
cannabis were handed over to NAFDAC and the National Drug Law Enforcement
Agency (NDLEA) officials in Benin.
Other items confiscated by the service include a Lexus ES 350
car, 2007 model valued at N3.318 million, a Mercedes Benz G 500 Bullet Proof,
2001 model with DPV of N60.750 million, Toyota Hilux , 2016 model valued at
N18.09 million and Toyota Prado 2015 model with DPV of N23.402 million.
Also confiscated are a Toyota Land Cruiser Prado 2014 Model
worth N33.145 million, Mercedez Benz GLE 350 with DPV of N25.199 million, Brand
new Toyota Land Cruiser 2018 with DPV of N37.999 million and Mercedez Benz C350
worth N4.955 million.
Other vehicles impounded include a Toyota Highlander 2013 model
worth N13.388 million, Toyota Highlander 2009 Model with DPV of N4.957 million
and a Mercedes Benz Truck with 230 cartons of 22kg imported rice.
The comptroller said that the unit’s patrol also seized six
bales of used clothes worth N10.270 million and other items.
He said that the seized items were mostly concealed in between
other items like electronics, gas cylinders, and door handles, while others were
seized as a result of wrong declaration.
“If you refuse to pay what you are supposed to pay as duty to
customs, you are a smuggler,” Azarewa said and enjoined the media to help the
service disseminate information on the dangers of smuggling.
Azarewa said that handing over the drugs to NAFDAC and NDLEA was
to rid the nation of illegal drugs to ensure the safety of Nigerians.
He urged Nigerians to ensure they engaged in legal business, pay
correct duties on imported items and save the country from unnecessary capital
flight.
According to him, some Nigerians are still desperate in
importing rice and other contrabands and advised them to desist from the act.
Receiving the drugs, Mrs Esther Itua, the Edo State Coordinator
of NAFDAC, commended Customs for the seizure, saying that the illegal use of
tramadol was responsible for certain ailments and eventual death of the user.
She said that the use of tramadol had remained a cause of
concern to the nation and NAFDAC, adding that the strength of the confiscated
drugs was far above the maximum dose always recommended.
“This tramadol is an overdose and is also not registered with
NAFDAC,” she said.
In his remarks, Mr Adewale Emayo, the Principal Staff Officer,
Operations and Investigation of the NDLEA, thanked Customs for handing over the
drugs.
He said that the drugs would be taken to their headquarters for
destruction.