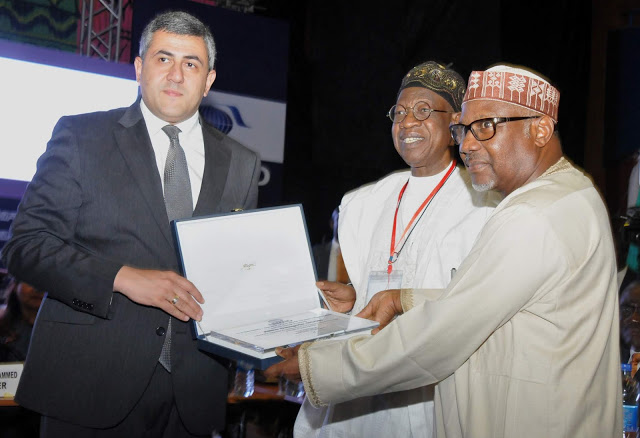 Business mogul, Aliko Dangote, owner of Dangote Group on Monday
in Abuja bagged ‘Special Award for Responsible Tourism’.
It was at the 61st United Nation World Tourism Organisation,
Regional Commission for Africa Conference.
Dangote who was represented by Mr Ahmed Mansur, Executive
Director for Strategic Management and Corporate Communication of the
conglomerate said it was a great honour to be recognised by a global body like
UNWTO.
He said “As I travelled round the world in pursuit of my
business activities, I enjoyed the wonderful sights and sounds that tourism
provides.
“I had opportunities to sample all that tourism could provide in
the continent. I consider myself not only a committed traveller but a tourist.
” I want to thank the honourable minister of Information and
Culture, Alhaji Lai Mohammed and his team and other tourism bodies for the
impact and opportunities made available to visit tourist sites,” he said.
He called on the private sector to partner more with the African
governments to continue to expand and deepen the tourism potentials on the
continent.
News Agency of Nigeria (NAN) reports the Conference with the
theme “Tourism Statistics: A catalyst for Development” brought together
participants from many countries in Africa and beyond to chart a way forward
for tourism in Africa.
The
Conference will end on June 6.
In another
development, the Senior Special Assistant
to President Muhammadu Buhari on Industry, Trade and investment, Dr Jumoke
Oduwole says the Nigerian Government is ready to support the south south region
to improve its ease of doing business.
Oduwole stated  this at South South Ease
of Doing business Reforms Forum held  in Benin on Monday.
She said the south south region was a
connecting area which has the potentials to emancipate the country economically
if the constituent states collaborate to explore beyond oil.
She said the federal government was working to
address challenge of power and other infrastructure in order to support MSMEs
which are predominant in the South South region of the country.
“The region has the geographic location
and resources such as gas, agrarian and millions of MSMEs. and MSMEs are
the engine that would stimulate Nigeria’s economy.
“We know that the enterprising nature of men
and women in the region are what is going to drive development in the
country.”, she said.
Gov. Godwin Obaseki of Edo in his opening
remarks said his administration is creating a friendly environment where both
domestic and foreign investors can do business favourably.
He said the Edo model is structured in such a
way that local investors must grow before foreign investors so that the place
of SMEs is assured.