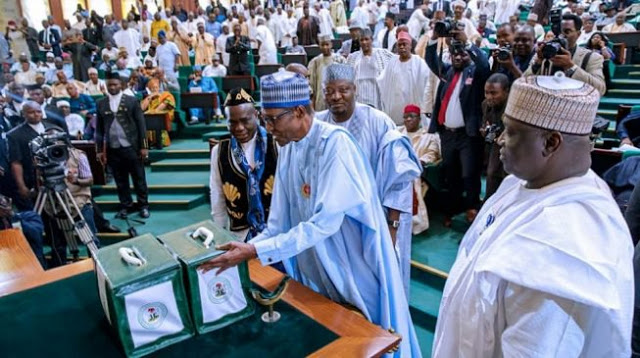 By
Martins Martins
The
Nigerian National Assembly on Wednesday passed N9.1 trillion for the 2018
fiscal year six months after it was presented by President Muhammadu Buhari.
Buhari
presented the budget to a joint session of the National Assembly on November 7,
2017.
Both
the Senate and House Representatives eventually passed the budget, jerking it
up with N500 billion raising the fiscal projection from N8.9 trillion
The
leaderships of both chambers had announced on Tuesday that they received the
budget reports of their appropriation committees.
The Senate
committee on appropriation had defended the increase of N500 billion, as
according to it is done after a consultation with the executive arm.
The
Legislature had specifically hinged the increment on increase oil benchmark
from the proposed N45 to N51.
Similarly
the exchange rate of N305 to a dollar and production of 2.3 million barrels of
oil per day was allowed as proposed.
The
document indicates that N42.72billion will be spent on security, N57. 15
billion on the 1 per cent vote for health as mandated by the National Health
Act, N106.50b billion for the Ministry of Power, Works and Housing.
It also
shows that Education would gulp N15.7 billion, Judiciary, N10 billion and Niger
Delta Development (NDDC) N44.20 billion.
A total
of N2.512 billion was set aside for debt service while N190 billion budgeted
for sinking fund for maturing loans.
On the
whole, the sum of N3. 512, 677, 902, 077 was for recurrent (non-debt)
expenditure with a slight increment from N3.404,277,820,219 proposed and N2,
873, 400, 351, 825 earmarked for capital expenditure as against N2, 427, 665,
113, 222.
Invariably,
the budget would have a fiscal deficit of N1, 954, 464, 993, 775 and q deficit
to Gross Domestic Product (GDP) of -1.73 per cent.
The development would no doubt bring respite to
all the facets of the country’s economy that have largely remained fragile.