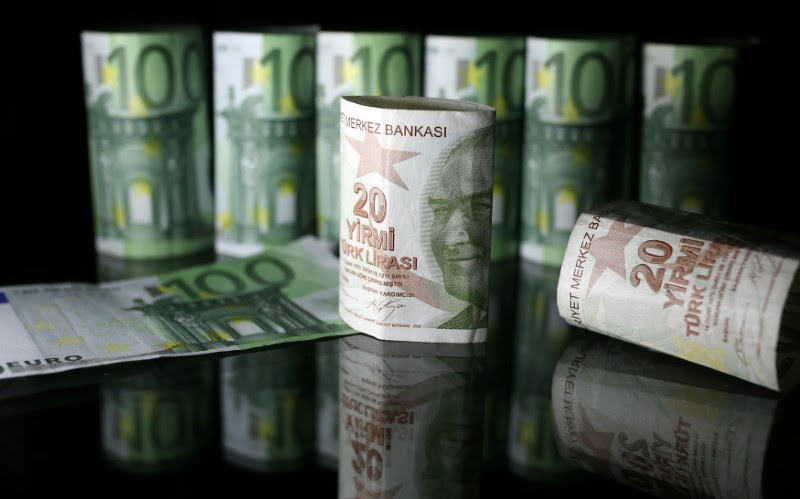 Turkish Lira and Euro banknotes are seen in this picture illustration taken June 25, 2018. REUTERS/Dado Ruvic/Illustratio
LONDON (Reuters) – World markets shuddered on Monday,
as Turkey’s worsening currency crisis persuaded investors to dump
equities and emerging markets and flee to safer assets such as
government bonds and the dollar.
The MSCI world equity index, which tracks shares in 47
countries, was down 0.5 percent on Monday and 1.6 percent since Friday’s
open as the Turkish lira plunged to a record low, forcing the country’s
finance minister to announce an economic action plan to ease nerves .
The lira has tumbled on worries over Turkish President
Tayyip Erdogan’s increasing control over the economy and deteriorating
relations with the United States. It fell as much as 12 percent at one
stage on Monday, then recovered to a loss of 7 percent by 0800 GMT.
“There’s
a risk-off mood generally triggered by the Turkish currency sell off,
and we are seeing a wider sell-off now, and it’s looking pretty ugly in
other emerging markets as well,” said Investec economist Philip Shaw.
He pointed to the South African rand and the Mexican
peso, both down about 2.5 percent on Monday, as two examples of emerging
markets hit by contagion.
“The plunge in the lira, which began in May, now looks
certain to push the Turkish economy into recession, and it may well
trigger a banking crisis,” said Andrew Kenningham, chief global
economist at Capital Economics. “This would be another blow for EMs as
an asset class.”
Turkish credit default swaps – a hedge against
financial turbulence – surged to their highest since the 2008 global
financial crisis as the lira took its latest dive.
EURO HIT
The euro zone has also been hit by Turkish woes, particularly after a report by the Financial Times last week suggested the European Central Bank is increasingly concerned about euro zone banks with exposure to Turkey.
The euro fell to a one-year low against the dollar on
Monday and sank to a one-year trough against the Swiss franc as well. It
hit a 10-week low to the yen around 125.45.
European stocks fell in early trade on Monday, with a
pan-European index of shares down half a percent and the banking stock
index as much as 1.2 percent lower.
This after MSCI’s broadest index of Asia-Pacific shares
outside Japan dropped 1.5 percent to a near one-year low. Japan’s
Nikkei lost 2.0 percent with every bourse in the region in the red.
Safe-haven government bonds were in demand, with yields
on German 10-year debt, the benchmark for the euro zone, dropping to a
one-month low. Overnight, U.S. Treasury 10-year yields also dipped to
the lowest in just over three weeks at 2.85 percent.
Copper prices, meanwhile, often seen as a proxy for global economic growth, were down 1 percent at $6,131 a tonne.
In other commodity markets, gold was last down half a percent at $1,204 an ounce.
Oil prices fell, with Brent crude off 25 cents at $72.56 a barrel and U.S. crude 21 cents lower at $67.43.
For Reuters Live Markets blog on European and UK stock
markets open a news window on Reuters Eikon by pressing F9 and type in
‘Live Markets’ in the search bar