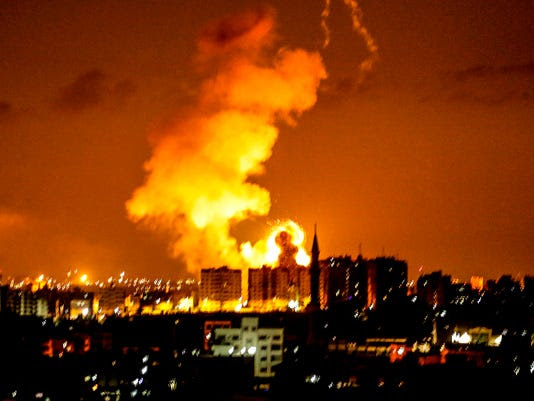 (Photo: MAHMUD HAMS, AFP/Getty Images)
CAIRO
— Even as the White House moves to unveil its’ “Deal of the Century”
vision for Middle East peace, it’s increasingly clear that that Arab
enthusiasm to partner with President Donald Trump on a
Palestinian-Israeli peace agreement is faltering.
The
central thrust of the plan – which Arab leaders have reportedly asked
the Trump administration to withhold – is to focus first on an economic
development program for Gaza with similar incentives applying to the
West Bank only if Palestinians concede permanent control over Jerusalem
with large settlement zones for Israelis and a limited sovereignty
arrangement that is several steps short of full independence.
But
after a year of shuttle diplomacy and multiple meetings with leaders in
Abu Dhabi, Riyadh, Amman and Cairo, American envoys Jared Kushner and
Jason Greenblatt have failed to convince Egypt or other key Arab states
that the U.S. can broker a fair solution.
“Most of
the Arab world – including Egypt and Saudi Arabia – have rejected the
U.S.-proposed Deal of the Century,” said Saad El Gammal, head of the
Egyptian parliament’s Arab Affairs Committee.
El
Gamal and other critics of the emerging deal say detailed planning for a
free trade zone or building power and desalination plants in Gaza
before tackling the political questions of Jerusalem, borders and
refugees is side stepping core Arab concerns.
“Trump’s
claims of ongoing support to the peace process are entirely false,”
said El Gammal pointing to the administration’s move of the U.S Embassy
from Tel Aviv to Jerusalem in May and American efforts this summer to
shut down UNRWA – the UN refugee agency assisting Palestinians in Gaza,
the West Bank and Jordan.
The refugee quandary
emerged again last week amid reports that Kushner proposed that the more
than 2 million registered Palestinians living in Jordan no longer be
listed as “refugees,” a word that implies a right to return to land
inside Israel.
It’s
a disappointing turn around for Arabs who remember the May 2017 photo
op in the Saudi capital Riyadh where President Abdel Fattah El-Sisi of
Egypt, King Salman of Saudi Arabia and President Trump jointly grasped
an illuminated globe at an anti-terrorism summit.
President
El Sisi had particularly high hopes to co-broker a Middle East solution
with the Americans, securing a good relationship with Trump and reaping
economic benefits from a new arrangement in the region that would place
Egypt at the center of a regional energy hub and attract international –
especially Saudi – investment.
“Working together
we can find a solution to the problem of the century in the deal of the
century,” Sisi told Trump in an April 2017 White House summit.
But peace seems as elusive as ever.
Over
weekend, two Palestinians were killed by Israeli fire and another 60
injured at a protest along the Gaza border amid ongoing Egyptian efforts
to broker a ceasefire.
Israel has faced a summer
long assault from Gazans with incendiary kites and balloons burning
fields in farms bordering the Palestinian enclave that is also adjacent
to the Egyptian-controlled Sinai. 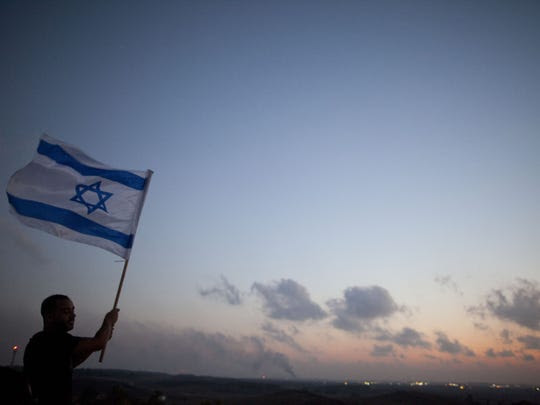 A man stands with an Israeli flag on a hill overlooking the Gaza Strip on July 20, 2014. (Photo: Photo by Lior Mizrahi, Getty Images)
“The
continued escalation against unarmed civilians in the Gaza Strip and
the tension it causes has dangerous implications for regional security
and stability, “said Egyptian Foreign Minister Sameh Shoukry after an
Aug. 7 meeting with Greenblatt, a lawyer with 20 years of service in the
Trump Organization – and no prior diplomatic experience. “The basic
living needs of Palestinian refugees cannot be separated from any
concept of a lasting, fair, and comprehensive solution.”
Large crowds of Palestinians protested on the Gaza-Israel border on
Friday. Video footage shows huge plumes of black smoke rising from
burning tIres. (Aug. 10)
AP
Shoukry’s
sentiments are echoed in Jordan where UNRWA provides direct assistance
to 1.1 million Palestinians in 10 refugee camps whose population
includes those who fled in the 1948 War that created Israel.
“The
right of return of Palestinian refugees and the status of Jerusalem and
its holy sites, these are red lines for all of us,” said Sadah
Habashneh, a member of parliament from the southern Jordanian city of
Karak. “It is impossible for Jordan to be party to such an agreement, as
it will be the most harmed by the so-called ultimate deal.”
In
July, the U.S. State Department released nearly $200 million of
military aid for Egypt withheld previously over human rights concerns, a
move that has tempered the official critique in Cairo of the
Kushner-Greenblatt plan.
“Our policy regarding the
“deal of the century” is clear,” said El Sisi in a July 29 speech at
Cairo University. “We say (Israel should pull back to) the pre-1967
borders and a Palestinian state should be established with East
Jerusalem as its capital, and I just want to tell you that we are
quietly playing this (peacemaker) role with the parties on that issue.”
But
reluctance to accept Egyptian efforts to mediate a truce between the
nationalist PLO administration in the West Bank and Hamas – the Islamist
faction – is an ongoing source frustration for Cairo where security
officials have tried to support a return of the Palestinian Authority to
Gaza.
Egypt has failed to bring the different
Palestinian factions together in a series of “reconciliation talks”
since Deal of the Century plans first emerged after Trump’s election.
“It’s
obvious that what the U.S. and Israel mean by reconciliation is not
what Egypt means,” said Mohamed Gomaa, a researcher specializing in
Palestinian affairs at Al Ahram Center, a Cairo think tank close to the
El Sisi administration. “Israel wants to see the Palestinian center of
gravity move to the Gaza Strip and establish a long-term functional
sharing of the West Bank. But Egypt wants a Palestinian national unity
government operating between the West Bank and the Gaza Strip.”
Meanwhile,
earlier this month, the National Security Council began canvassing the
State Department and other U.S. government agencies seeking volunteers
to join the Kushner- Greenblatt Mideast peace team as they move to
publicly announce details of their plan already shared with Arab
leaders.
But these efforts are not going to raise the dim view of the “deal”
pervades the hookah cafes and television talk shows regionwide.
“So
far, no one has come out to tell us the full details,” said Ahmed
Abdeen, a 31-year-old Cairo political commentator and frequent guest on
the Al Araby TV satellite channel. “But it looks like a quasi-state for
the Palestinians that legalizes the Israeli occupation.”
“I
do not think that the U.S. position today can be called mediation since
mediation means neutrality to help reach a solution,” he added.
“America under Trump’s administration has adopted the Israeli position
completely.”

Save
For U.S. to Stay in WTO, China May Have to Leave Djibouti Ports Sufficient for Serving Ethiopia – Official