In
South Africa, we are inclined to think of ourselves as entirely unique
in terms of our history of struggle and the continuing challenges we
face nearly a quarter a century after we attained our political freedom.
In 2018, as we mark the centenary of the birth of Nelson Mandela, we
can surely be forgiven for pausing to celebrate with pride at least a
few of our characteristics that make us uniquely South African.
This
sense of being different has become more acute in recent years as the
trajectory of our democratic politics has put our democratic
institutions to the test. And yet, South Africa’s institutions of
governance remain robust and continue to advance the fundamental
interests of human development, freedom, transparency and democracy. We
continue to defy those who have predicted imminent catastrophe for more
than two decades now.
On the other hand, the steady
erosion of the post-second world war global consensus, the rise of
populism, anti-migration sentiment and a trade war among developed
economies provides for a different perspective on our South African
challenges. Our people still see the best as yet to come while others
mourn for their past.
In fact, the BRICS nations as a
group continues to move in a different direction to much of the
developed world, particularly with respect to trade and investment.
Intra-BRICS trade, for example, has more than doubled from 204 billion
South African rand in 2010 to 462 billion South African rand in 2017.
This
achievement has been consolidated through the implementation of BRICS
forums across a wide range of activities and institutions such as the
BRICS New Development Bank. This steady institutionalization of BRICS
relationships will enhance the group’s effectiveness as cooperation and
integration become further embedded in our relationships with one
another and with the rest of the world.
This is a
substantial achievement particularly in the context of lingering
developed market skepticism about whether BRICS could amount to anything
more than the invention of an investment banker.
For
South Africa, the occasion of the 10th BRICS Summit is not only a point
of national pride. The summit also comes with a great deal of
engagement among the BRICS institutions as we get deeper and deeper into
the mechanics of cooperation and integration.
Our
BRIC partners and representatives from many other countries attending
the summit will find a re-energized country wide open for business and
fully engaged in the task of attracting new investment.
The
centerpiece of this drive is President Cyril Ramaphosa’s target of 100
billion US dollars in new investment over five years. The president will
emphasize to our BRICS partners and other heads of state that South
Africa’s investment proposition for foreign investors remains a powerful
one.
He has put in place a team of special envoys on
investment, who are setting about meeting with significant businesses
and leaders from all over the world to promote investment towards
meeting the 100 billion US dollar objective.
In
practical terms, South Africa’s Department of Trade and Industry (DTI)
is leading efforts to create an enabling environment for investment and
trade. The department has established a relatively new entity, Invest
SA, as one-stop facility to assist potential investors with the
procedures required to meet regulatory requirements to grow the economy
and create jobs. 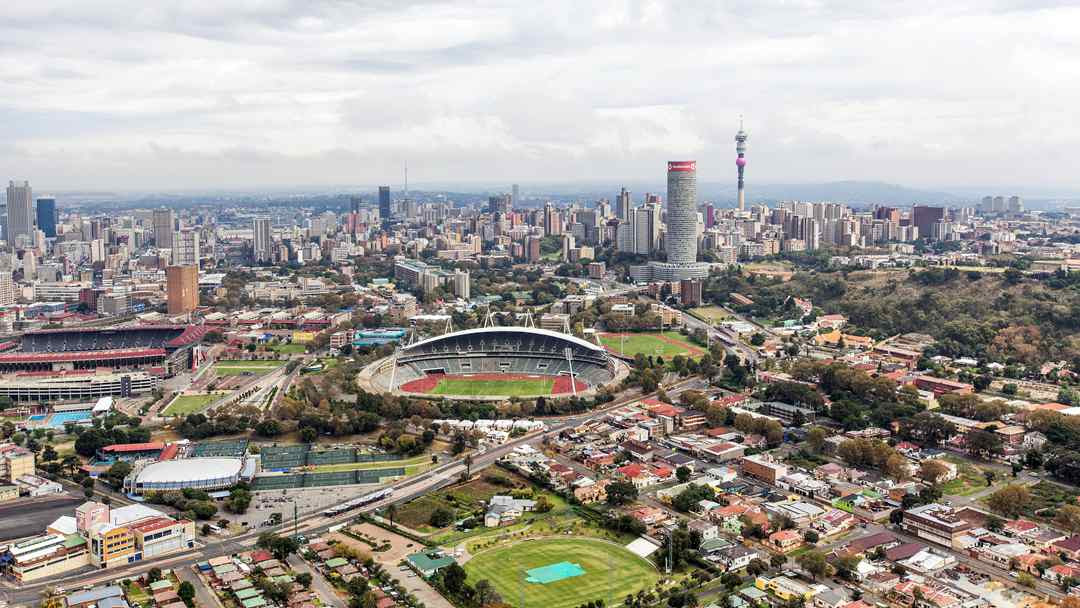 Johannesburg skyline, South Africa /VCG Photo
In
addition, there is a broad range of incentives for investors and
support services available in the country’s Special Economic Zones.
Beyond the often-shifting tides of global macro-economic fortunes, South
Africa maintains core characteristics that investors can count on in a
more uncertain world.
We have a growing middle class
and an affluent consumer base that underpin excellent returns on
investment. South Africa is still abundantly endowed in precious metals.
We are the world’s leading producer of platinum group metals and the
sixth largest producer of gold with world renowned underground mining
expertise.
Even as Africa continues to rise, South
Africa is a diversified African economy with the best manufacturing and
leadership as a services destination.
For evidence
of this status, we can turn to multinationals for whom South Africa is
the location of choice. Global corporations continue to reap the
benefits of doing business in South Africa which has a supportive
ecosystem as a hub for innovation, technology and fintech.
In
terms of a key aspect of investor interest and concerns, South Africa
remains number one in Africa and highly rated globally for a regulatory
framework and judicial system that protects investors. The country’s
commercial and legal practices are in line with those in the rest of the
developed world.
Indeed, we are already widely known
for our sophisticated banking sector which has a major footprint in
African countries. This underpins our status as the largest financial
hub in Africa, with the JSE the continent’s largest stock exchange by
market capitalization.
Our world-class physical and
technology infrastructure is targeted for ongoing investment and
expansion that will enhance levels of investor comfort in a very
practical manner.
The conditions are especially
favorable for investors seeking to benefit from the African Continental
Free Trade Area (AfCFTA). The AfCTFA will boost intra-Africa trade and
create a bigger market of more than billion people on a continent with a
GDP of 2.6 trillion US dollars. The keys to unlocking industrial
development are thus available to investors seeking long-term
opportunities with stable returns.
In terms of
state-owned entities, which are of particular concern to investors, it
has been most encouraging to note the significant progress made in
stabilizing the governance structures and thus placing these enterprises
on a sound path to recovery. The South Africa government’s commitment
to the efficient management and optimal performance of its state-owned
entities is demonstrated through the various initiatives aimed at
strengthening governance models and improving compliance to ensure
adhere to the principles and practices of good governance as envisaged
in the public finance management acts.
The Open
Budget Index, an index that independently rates the transparency of
government budgeting processes, ranked South Africa at number two out of
102 countries evaluated. This is testimony that as a nation we are
committed to high levels of transparency and a public-sector governance
model that ensures democratic accountability. In a similar vein, the
World Bank Ease of Doing Business Index ranks South Africa 22nd in the
world for investor protection, while Business Monitor International’s
2017 Trade and Investment Risk Report puts us at the forefront in terms
of comparatively low investment-related risks in the region.
This
means that South Africa’s sound institutional framework, which is built
on the robust foundation of a constitutional democracy, positions the
country favorably as we work to enhance and maintain business
confidence.
Any investor should in my view be pleased
by the palpable fresh energy and renewed optimism among the country’s
friendly and inviting people. We hope investors will be encouraged and
reassured by our choice to live on the front foot, in the certain
knowledge that the arc of our history bends resolutely towards a better
life for all.