Nigeria to Benefit from Trade War 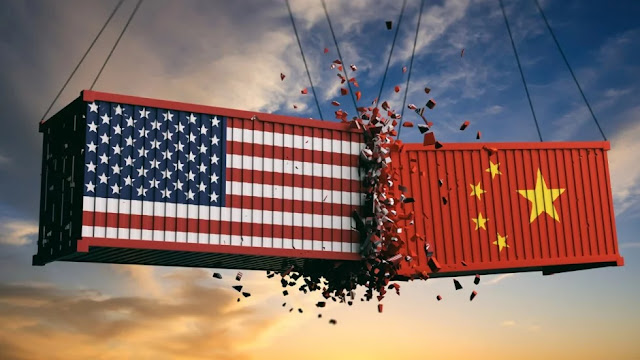 President Donald Trump’s trade
protectionist measures will ultimately benefit Nigeria, as escalating
global trade tensions are expected to give additional support to Brent
Crude prices, a report has stated.
The latest round of trade wars saw the
US imposing tariffs on Chinese imports worth US$34 billion, with the
Chinese government responding by imposing retaliatory tariffs on US
imports of a similar amount.
President Trump had also threatened to impose tariffs on additional
US$200 billion worth of Chinese imports and there could be counter
measures by China if Trump make good on his threat.
But analysts at Lagos-based CSL
Stockbrokers Limited, believe that, “heightening US-China tensions could
have far-reaching implications on global energy markets.”
They added, “Indeed, considering China’s position as US’s second largest
crude importer, retaliatory tariffs on US oil imports becomes more
likely should the US continue to raise tariffs on Chinese imports.
“This would see Chinese refiners seeking
to source a higher proportion of their inputs from non-US crude
suppliers such as those from Russia and Saudi Arabia.
“In effect, we could see Brent Crude’s (global oil price benchmark)
premium over West Texas Intermediate (WTI; US price benchmark) widen,
with Brent breaking past US$80/bbl resistance levels,” they stated.
Meanwhile, in a separate report on their
macroeconomic outlook, analysts at the investment bank noted that
rising commodity prices would continue to benefit commodity exporters
such as Russia, Brazil and Nigeria, will help to drive emerging markets
growth.
They anticipated that oil prices were likely to remain in the US$70-75/bbl range over the remainder of the year.
“Although the OPEC/Russia production agreement may well be unwound
before the end of the year, geopolitical risks (deteriorating US-Iran
relations in particular) and robust demand from the US and EMs will keep
prices supported.
“Our main views on FX and fixed income
from the start of the year have played out, with depreciatory pressures
on forex building and yields on treasury instruments declining,
particularly at the short end of the curve.
“Looking ahead, we believe the CBN will have the willingness and the
ability to hold the NAFEX rate at its current levels, despite
fundamental and valuation depreciatory pressures.
“We hold a neutral view on fixed income
from a duration perspective but believe that carry trade will remain
attractive for foreign investors amid currency stability,” they added.
CSL Stockbrokers Limited maintained its 2018 real Gross Domestic Product
growth forecast of three per cent despite the relatively disappointing
first quarter 2018 data that was released by the National Bureau of
Statistics.
“At this stage, we keep our baseline
assumption at an average of two millionbpd in 2018 despite recent
disruptions to production. A higher oil price environment will boost the
sector and we forecast oil prices are likely to remain in the
US$70-75/bbl range over the remainder of the year.
“Higher oil prices and adjustments to planned spending in the approved
budget have led us to revise down our estimate for the budget deficit to
N2.4 trillion from the N2.7 trillion that we expected at the start of
the year.
“We retain the view that the authorities
will rely more heavily on domestic markets for budget financing than
the budget suggests.
“Inflation, which has declined more rapidly than we were expecting, is
close to bottoming and we expect that the CBN will reduce the monetary
policy rate by 100 basis points monetary policy rate to 13 per cent
during the second half of the year,” it added.
They, noted however, that the CBN may
not make any rate cuts given its concerns about inflationary pressures
from fiscal spending.
“The current account surplus returned to near pre-oil crash levels in
first quarter 2018 although this was largely due to weak import demand
as opposed to a recovery in oil exports.
“We expect the surplus to decrease
during the second half of the year as oil export revenues remain around
current levels while import demand increases.
“We continue to expect investment inflows to slow relative to late 2017
and early 2018 and, in conjunction with a smaller current account
surplus, this will lead to reserves plateauing or even declining
slightly during the second half of the year