Never mind the trade war, this is how China and the US can both get what they want 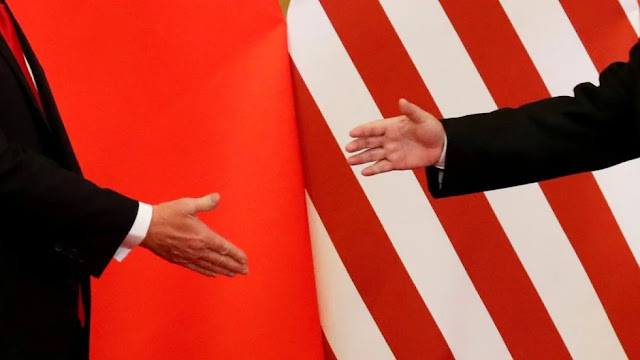 China exports US$500 billion of goods to the
United States, but imports only US$150 billion. US President Donald
Trump figures that a trade war against China is easy to win, as it would
quickly run out of equivalent retaliatory tariffs and would soon have
to buckle to US demands.
However, 85 per cent of the Chinese products hit by initial Trump
tariffs are machinery and components used by manufacturers in the US. As
for consumer goods, Americans will struggle to cope, not just with
increased costs of substitutes but their availability. China is not
exactly running out of retaliatory ammunition. The US has a US$38.5
billion trade surplus with China in services. If pushed into a corner,
China may well put pressure on US banking, professional and other
service businesses on the mainland.
It also holds US$1.2 trillion of US treasuries. While it is not
feasible to dump them without hurting itself massively, China may well
decrease its holdings gradually. Much of the slack can initially be
offset by other investors, but in an era of rising interest rates, this
redress may be limited, putting pressure on the US economy.
China controls 90 per cent of global supply of rare earth metals.
These are vital to a variety of industrial sectors including health
care, energy, electronics, and defence. Decreasing supply to US
companies could cause massive disruptions.
China appears capable of weathering this storm, as the US accounts
for 19 per cent of its total exports and their value represents only 3
per cent of China’s economy, which has shifted more to services and
consumption.
Nevertheless, market economists reckon that every US$100 billion of
imports affected by tariffs would reduce China’s economic growth by 0.1
to 0.3 percentage point. A broadly similar reduction of US growth is
also expected.
Full-blown tariffs of US$500 billion would thus shave off 0.5 per
cent to 1.5 per cent of China’s growth. As the US tussles with other
trading partners, it is likely to be hit harder. It would also hurt more
US jobs than it helps.
But the US is not alone in its concerns. It wants China to stop
pressuring US businesses to share or transfer intellectual property, to
improve market access and level the playing field, and to import more
American products. These goals are bipartisan and shared by the European
Union.
The recent near-death by US sanctions of ZTE is a wake-up call for
China to grow its own core semiconductor chip technology. To realise the
“Chinese dream”, the nation needs to promote home-grown innovation,
press on with opening up, and stimulate growth of domestic consumption.
These national imperatives happen to tally largely with what Trump
wants.
There are signs China is toning down its rhetoric of trade war and
national triumphalism. More can be done to change negative perceptions.
In the South China Sea, for example, it can consider joint development
of resources and fisheries with rival territorial claimants.
At home, China can afford more space for freedom of expression. It
can promote a more vibrant civil society, including humanitarian
projects overseas, working as necessary with the United Nations.
What is more, President Xi Jinping could nudge President Trump into
taking a leadership role in negotiations for Free Trade Area of the
Asia-Pacific (FTAAP), which includes both China and the US. This would
show that China continues to embrace free and fair international trade
but harbours no wish to displace the US as leader in the Asia-Pacific.
Nevertheless, an early happy ending is unlikely. Until the full pain
on US businesses and consumers kicks in, and before America’s midterm
elections in the autumn, President Trump is likely to tighten the screws
while China has to continue with measured retaliations. Brace,
therefore, for a long, hot summer.
Andrew Leung has had decades of experience as a senior Hong Kong
government official in a variety of fields including finance, industry,
social welfare and overseas representation.