On July
25 BRICS leaders started the 10th summit from South Africa, with the
theme “BRICS in Africa: Collaboration for Inclusive Growth and Shared
Prosperity in the Fourth Industrial Revolution”. BRICS members strive
towards the creation of an inclusive society and global partnerships
that will bring prosperity to all humankind.
South
Africa has invited the leaders of Argentina, Indonesia, Egypt, Jamaica,
Turkey, UN Secretary General Mr. Antonio Guterres, under the sub-theme:
BRICS Plus: Securing sustainable and inclusive growth for the prosperity
of the Global South. These countries represent regional economic
communities in the global south and the United Nations.
It’s
not the first time that South Africa has hosted a BRICS Summit as South
Africa hosted the fifth BRICS Summit in March 2013. South Africa
proposed new areas of BRICS cooperation, embodying a working group on
peacekeeping, Vaccine Research Centre, BRICS gender and women’s forum,
BRICS tourism track of cooperation.
BRICS economic
cooperation is rapidly growing. Total intra-BRICS trade has grown
rapidly with a value of 462 billion US dollars in 2017 from 204 billion
US dollars in 2010. 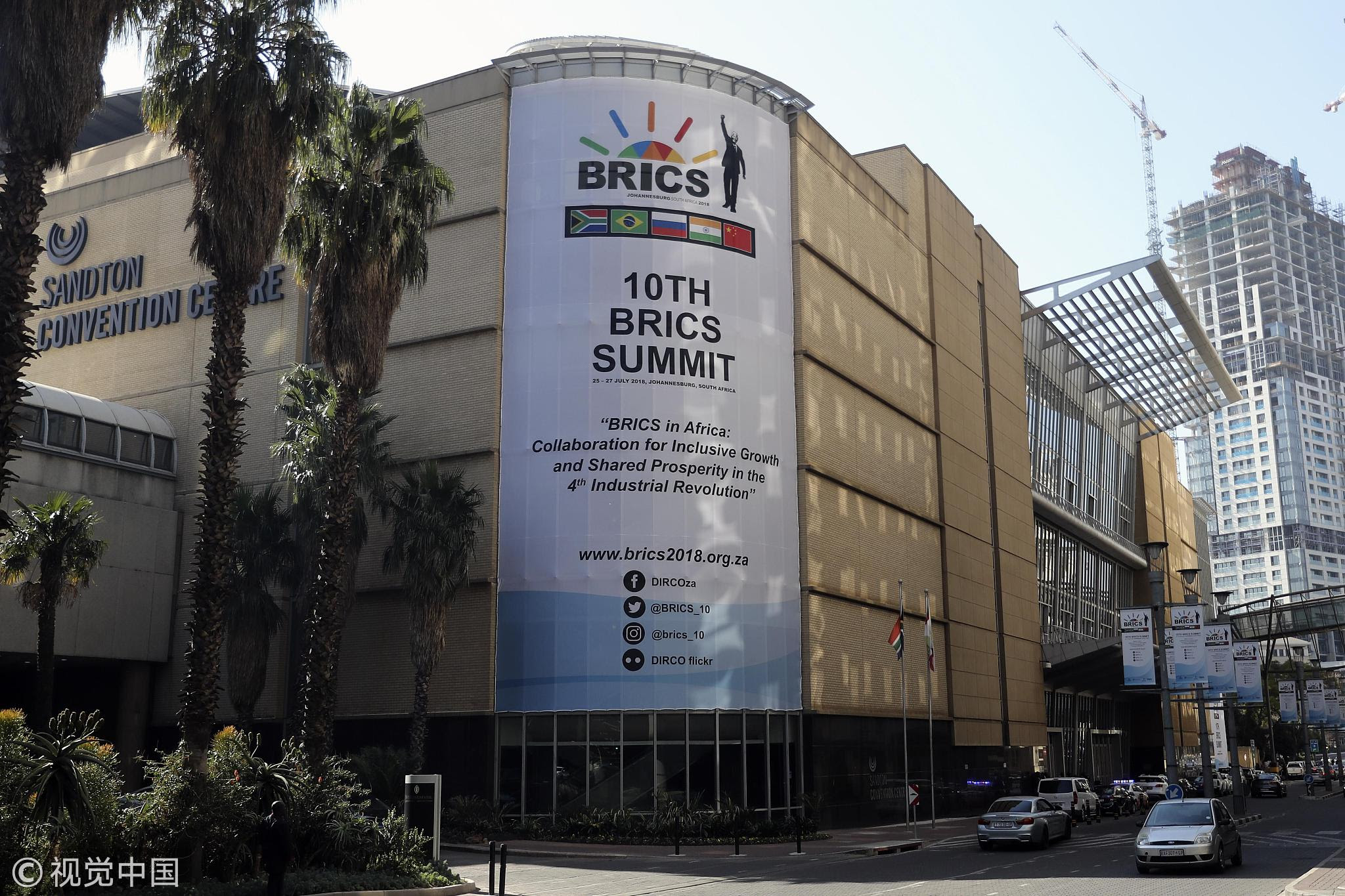 10th BRICS Summit in South Africa./ VCG Photo
The
Xiamen Summit in 2017 saw the conclusion of four agreements in the
areas of economic and trade cooperation, innovation cooperation, customs
cooperation, strategic cooperation between the BRICS business council
and the new development bank.
These agreements
contribute to and support the realization of the shared objectives to
which the BRICS leaders committed in 2015. BRICS members underlined
their firm commitment to free trade and the centrality of a rules-based,
transparent, non-discriminatory, multilateral trading system (MTS) as
embodied in the World Trade Organization (WTO).
This
includes opposing the new wave of protectionism and the systematic
impact of unilateral measures that are incompatible with WTO rules and
undermine global trade and economic growth.
In this
regard, they reiterated that the WTO Dispute Settlement System is a
cornerstone of the MTS as it is designed to enhance security and
predictability in international trade.
Political and
security cooperation between BRICS members is aimed at achieving peace,
security, development, and cooperation for a more equitable and fair
world.
BRICS provides opportunities for sharing
policy advice and exchanges of best practices in terms of domestic and
regional challenges as well as advancing the restructuring of the global
political architecture so that it is more balanced, resting on the
pillar of multilateralism. June
4, 2018: (From L) Russian Foreign Affairs Minister Sergei Lavrov,
Minister of Foreign Affairs of China Wang Yi, South African Minister of
International Relations and Cooperation Lindiwe Sisulu, Brazil’s Vice
Minister of Foreign Affairs Marcos Galvao and India’s External Affairs
Minister Sushma Swaraj pose for a picture during the BRICS Ministerial
Meeting held at OR Tambo International Building in Pretoria, South
Africa./ VCG Photo
Therefore, BRICS aims to reach harmonies with Africa’s Agenda 2063 and the 2030 Agenda for Sustainable Development.
As
for BRICS’ people-to-people exchanges, a lot of forums have taken
place, including the Young Diplomats Forum, Parliamentarian Forum, Trade
Union Forum, Civil BRICS, and the Media Forum.
Africa
needs more from BRICS. Africa aims to achieve inclusive economic growth
for its people. The continent objectives are strongly complemented by
the accelerator growth potential that BRICS engagement has delivered to
the continent. The potential for growing trade and investment, as well
as intra Africa BRICS trade and investment, must be further maximized.
Despite
the great efforts made by China, Africa needs more. If we look at the
other members of the BRICS, we obviously find the contribution they made
is far behind China’s.
The BRICS block principles
adopted and promulgated would be applied on the African ground. The 100
billion US dollars China has invested has been used for establishing six
industrial zones and many infrastructure projects.
The
World Bank reports that the number of people described as in extreme
poverty is 644 million, representing 8.5 percent of the world’s
population of 7.6 billion.
If we look at the map of
poverty distribution in the world according to the World Bank, we find
that most of the very poor countries are on the African continent.
Eleven African countries, which include South Sudan, Democratic Republic
of Congo, Zambia, Congo, Central Africa Republic, Madagascar, Somalia,
Chad, Niger, and Nigeria with a total population of 252 million, are
classified as “poverty is rising”. 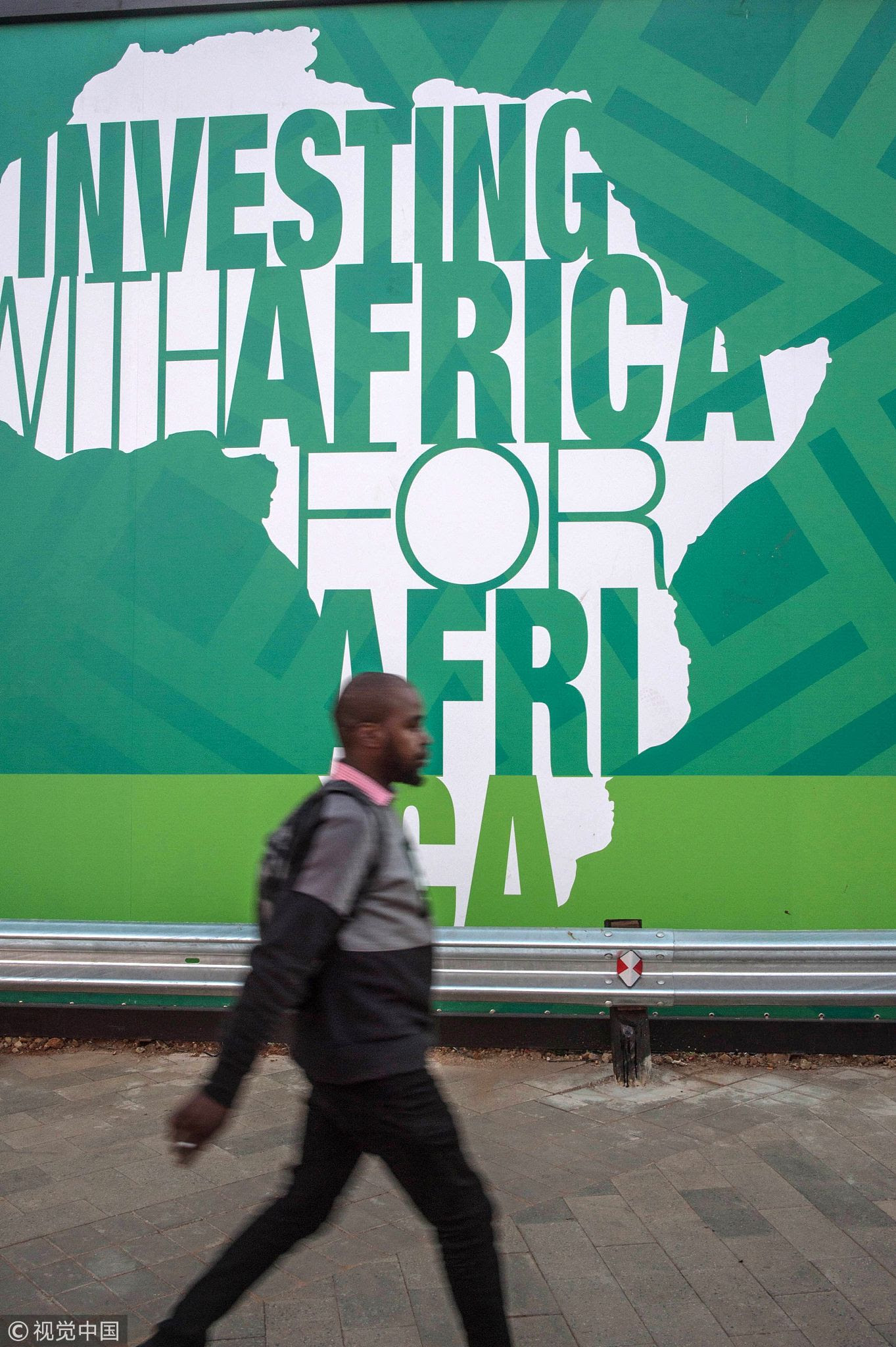 July 25, 2018: A billboard in Sandton district of Johannesburg./ VCG Photo
Another
36 African countries are classified as “not able to reach the target at
the current poverty escape rate”. This means that the problem is deep
and widespread in the African continent.
The world is
moving faster. Russia, India, and Brazil should show more interest in
African development and contribute effectively. Education and health
sectors have not received adequate attention. The agricultural and
industrial sectors still need more attention.
As for
the African financial system, it is also lagging behind and needs a lot
of development, which is a major obstacle in terms of investment and
achieving a higher growth rate.
Take the agricultural
sector as an example, African universities and research institutes
suffer from funds shortages. Africa needs more technical institutes for
the training of skilled labor.
Ultimately, we are
grateful to China for its constructive initiatives, especially the Belt
and Road Initiative, and the provision of loans and the construction of
mega projects. But we want Russia, India, and Brazil to follow China’s
approach on the continent to provide more to achieve the sustainable
development of Africa.