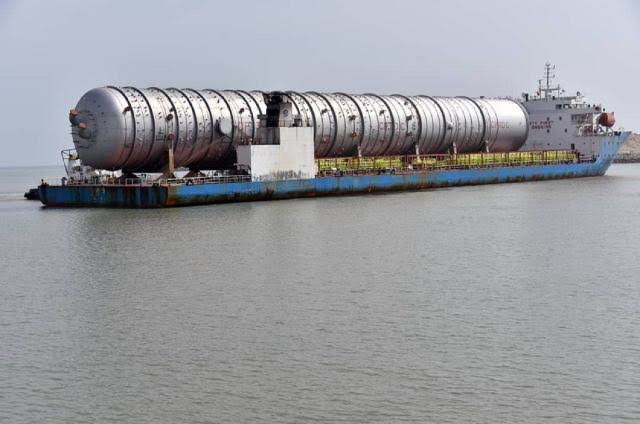 The Dangote Oil Refinery Company has taken delivery of what it described as the world’s largest crude distillation equipment.

Capt. Rajen Sachar, Head, Maritime and Ports Infrastructure of Dangote, told newsmen at the arrival of the equipment in Lagos that it was the biggest single-train facility used for refining crude oil.

The atmospheric equipment which was manufactured by Sinopec company in China, is the primary unit processor of crude oil into fuels.

According to him, the crude distillation column works on the principle of fractional distillation, leading to separation of various components in the mixture on the basis of their different boiling points.

He said: “Crude oil enters the top of the column, where the inlet temperature is 165 degrees centigrade gradually increasing to 357 at the bottom of the column.

“During this passage, the crude and its vapours pass through a complex web of internal trays to increase the contact time and surface area.

“Within the column, the hot vapours travel upward  through bubble caps which allow the vapour to pass through the tray with the cooler liquid flowing downward the column.

“When the vapour reaches the height within the column where its boiling point is equal to the temperature of the column at that height, it condenses to form a liquid.

“The liquid then collects on various trays in the column at differing heights from where it is extracted out of the column.

“It is, therefore, critical to control the heat load of the column to optimize the crude crack.

He said that the crude column would enhance the economy of Nigeria and all neighbouring countries in Africa by making available refined petroleum products meeting world standards emission norms of Euro 5 and Euro 6.

The captain said the strategic location of Nigeria in West Africa continent would help in reducing the transportation costs of the fuels to other countries in Africa thereby provide cost effective high grade petroleum products to them.

He said that the development would  redefine Nigeria’s position in the global petroleum products market.

He said that the equipment was capable of refining 650,000 barrel per day (bpd), adding that the refinery was designed to be Africa’s largest.

Sachar said that the technology was significant to Nigeria and Dangote Oil Refinery Company.

According to him, the technology will bring multiplier effect positive to the company and Nigeria through supply to huge markets.

Sachar said that the project was  expected to generate over 9,500 direct jobs and 25,000 indirect jobs.

“The crude distillation column is the largest in terms of distilling capacity which is 650 thousand barrels per stream day.

” At present, this is the world’s largest single train refining column.

“It is the largest diameter, longest length and the heaviest single-unit equipment in domestic export equipment.

“It will be installed in the world’s largest single-series refinery – the 32.5 million tonne/year Dangote refinery in Nigeria,” he said.

He said that the  crude oil processor took 14 months in construction by Sinopec company in China and eight weeks to be brought  down to Nigeria.

“Dangote refinery also invested heavily in dredging the sea from the refinery to Apapa for easy passage of the vessel,” he said.

He said that the President of the company, Alhaji Aliko Dangote, was passionate about technology transfer to Nigerians.

Sachar said that Dangote Oil Refinery Company was currently training young Nigerian engineers in Mumbai, India, in refinery operations in preparation for the take-off of its Lagos Refinery and Petrochemical Plant.

He said that the training was a continuum as more engineers would be trained to work effectively in a fertiliser plant and refinery being built by the company.

In his remarks, Mr Lawal Saheed, Pilot Grade 1 of the Nigerian Ports Authority, who accompanied the vessel from Apapa Port to Dangote Jetty commended the vessel crew who brought the equipment from China.

He said that it took seven hours to drive the vessel from Apapa to Dangote due to the heavy equipment.

Saheed said: “It took an experienced and patient pilot to move the vessel to the final destination due to sea waves.

” I am  happy  that l am part of  the progress. l am proud to be associated with such a landmark achievement.”