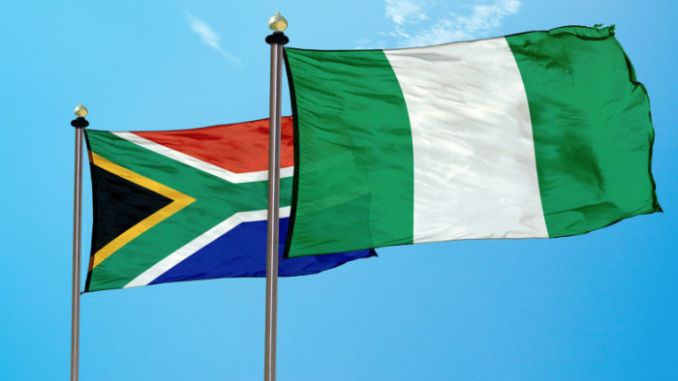 The Consul-General of Nigeria to South Africa, Mr Godwin Adama, has said that robust Nigeria- South Africa relationship was important to enjoy peace, sustainable development and regional integration in Africa.

Adama said at the Nigeria-South Africa Chamber of Commerce Nov. 2019 breakfast forum tagged: “Nigeria- South Africa; What Next?” in Lagos that such relationship would lead to Africa’s growth and prosperity.

“Between 2017 and 2018, our export to South Africa grew by 84 per cent, indicating a strong upward trend in export value, year over year.

“Therefore, stronger ties and robust relationship between these large countries would ensure African  unity and brotherhood,” he said.

Adama said explained that the Nigerian foreign service would continue to seek out key allies within international organisations and strengthen relations with South Africa.

This, the consul-general said, would almost certainly go a long way in helping Nigeria pursue its strategic objectives around the world.

“Some of the benefits we seek to realise are expedition of visa issuance for students, tourists and other visitors, as well as facilitation of long-tenure visas for Nigerian business people who frequently travel to and from South Africa.

“It is expected that recent bilateral agreements between both countries will help to prevent recurrence of xenophobic attacks against Nigerians and other foreign nationals,” Adama said.

The consul-general lauded Nigerians that contributed in various capacities both in terms of finance and logistics during the successful evacuation following the xenophobic attacks.

The Chairman, Nigeria-South Africa Chamber of Commerce, Mr Foluso Philips, said that both nations should complement each other and forge strong partnerships to facilitate accelerated economic growth and prosperity among Africans while ensuring continental integration.

Philips also called for urgent action to address the issue of poverty in both countries to end desperation which leads to mistrust and suspicion.

“Nigeria presents a huge market with a population of over 180 million people and vast basic agricultural and mineral resources, while South Africa presents immense technical know how in technology and manufacturing capabilities.

“It is very imperative for both countries to close ranks towards the implementation of the African Union agenda.

“Both countries are genuinely trying to complement each other, in spite of all the human and sporadic social challenges experienced to date.

“This would require a strategic partnership in pursuance of Africa’s cooperation and in the promotion of a rules- based international system.” he said.

Phillips said that the financial year of the chamber for 2018 ended with a surplus of N24.95 million.