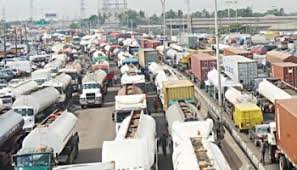 Some maritime experts have urged the Nigeria Ports Authority (NPA) to implement the electronic truck call-up scheme to check traffic gridlock on the Apapa ports roads.
The experts who expressed concern over the persistent traffic gridlock on the area in spite of the completion of the Apapa Wharf road meant to ease traffic on the road.
The truck call-up scheme is aimed at managing trucks going into the port to avoid congestion.
The scheme was the outcome of a survey by the Nigeria Shippers Council (NSC) to aid traffic management and had since been handed over to NPA for enforcement.
Mr Osuala Emma-Nwagbara said that, with the implementation of the truck call-up system the holdup still being experienced on Apapa area would vanish.
“The NSC took time to carry out that project and such a programmatic solution to the problem that has taken its toll on the nation’s economy should not be overlooked.
“It is the duty of NPA to bring the policy to bear as further delay may be misconstrued by stakeholders,” Nwagbara said.
According to him, the system provides a truck part to be sited outside the port areas where these trucks that are littering the roads around ports, waiting for their turn to enter the port will be parked until they are alerted through an e-call-up.
Mr Ademola Akinkunmi, a manager, with Africa Port service (APS) Ltd., said NPA should encourage private participation in truck Transit Park.
He said that, transit parks might be one of the things that were delaying the scheme from being implemented.
“There is need for the provision of parks for the truck that will serve as truck holding bay.
“We know that by the time the policy come on stream there would be sanity on the roads and the move by truckers to park near ports in anticipation of gaining entrance to ports for transaction will be over.
“All that is contributing to this crisis is not but attitude on the side of the truckers and maladministration on the part of the managers,” Akinkunmi said.
Mrs Angela Utashi, a transporter, said that with the enforcement of the policy, the over 3,000 trucks that lie on the port access roads would be reduced to manageable number.
She, however, appealed to NPA to see reason to enforce the scheme and save man hour on the road.