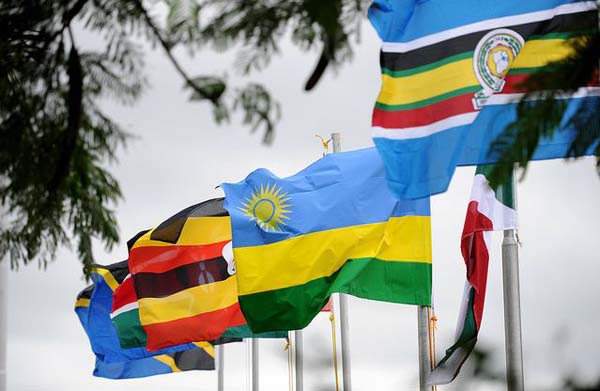 The continuous introduction of tariff and
non-tariff barriers are hampering intra-regional trade and putting
integration at risk in East Africa.
Many manufacturers are complaining of
encountering tariff and non-tariff barriers that blocked them from
entering regional markets.
East African Community partner states
that the manufacturers are largely in confectionery in Kenya, oil and
fats in Uganda and a wheat and juice producer from Tanzania.

Yasin Billo, export manager of Tanzanian
industrial conglomerate Bakhresa Group, said the company currently has
15 trucks stuck at the Tanzania-Kenya border because the Kenya Revenue
Authority changed the rules and systems for
exporting goods to the country.
However, Tanzanian Commissioner for
Customs and Excise Ben Usaje said Bakhresa Group believed they were
being mistreated because of the continued dispute over Kenyan
confectionery.

Customs officials in Tanzania have
blocked Kenyan confectionery products because they were allegedly
manufactured using sugar that was imported at zero rate, instead of the
EAC’s 100 per cent CET.

In 2017, Kenya faced a sugar crisis that prompted importation of sugar at a zero tariff.

Under the EAC regulations, this rate
should have been 100 per cent, since sugar is a sensitive product that
needs protection from dumping.

An earlier committee formed by the EAC to
verify the origins of ingredients used in the process of manufacturing
confectionery compiled a report that Mr Usaje says was “non-committal.”
“Products manufactured using industrial
sugar when transferred to the EAC qualify for preferential tariff
treatment provided they meet the criteria set under the EAC Rules of
Origin, 2015, and other conditions set under the EAC
Customs Management Act,” the report says.
The report adds that sugar for industrial
use was not imported under the provisions of the Kenya Gazette notice
announced in May 2017.

Mr Usaje questions the methodology used
by the committee to come to the conclusion that confectionery makers
used industrial and not ordinary sugar.

These tariff and non-tariff barriers coupled with what appear to be political manoeuvring are harming trade across the region.
The EAC Trade and Investment Report shows
that intra-regional exports dropped by 42 per cent from $3.7 billion in
2013 to $2.6 billion in 2016.
The 2017 preliminary trade and investment report shows that intra-EAC exports recovered slightly to increase by nine per cent.

This is attributed to favourable weather conditions that contributed to a bumper harvest in the region.
The report also notes that intra-EAC
exports increased from $2.6 billion in 2016 to $2.9 billion in 2017 on
account of growth in manufactured goods such as cement, textiles, sugar,
confectionery, pharmaceuticals, fats and oils
moving freely in the region.
The report notes that in 2017, most East
African partner states were able to resolve non-tariff barriers,
facilitating increased trade in products like oils and fats and dairy
products.

The states also discontinued policies that suspended the implementation of sections of the EAC Common External Tariff.

However, these non-tariff barriers are back, threatening the gains that were made last year.

In addition to the trade disputes between Tanzania and Kenya, Uganda has also been experiencing its own challenges.

For example, Uganda’s cooking oils and
fats can’t enter the Tanzanian market because of alleged failure to meet
the EAC Rules of Origin.

Nigeria can be food basket in Africa – AGRA

Total scales up production in Angola

Free Trade Is No Utopia