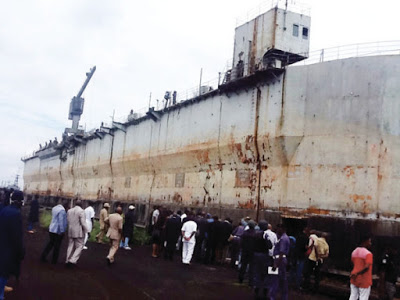 The inefficiency in Nigeria’s ports is causing the country $3 billion annually in loses.
The annual loss is unveiled by a study
entitled Nigeria: Reforming the Maritime Ports which was jointly
conducted by the Financial Derivatives Company and the Lagos Chamber of
Commerce and Industry (LCCI) in 2016.
The study reveals that operational
indices that ought to have engendered positive changes are rather
declining progressively by the day owing to a number of factors.
As at 2018, experts say it is not yet Uhuru as there is no noticeable improvement in this figure.

Of the people interviewed for the report
in 2016, 57 per cent were largely corporate users of the ports with 11
per cent coming from the federal government ministries, departments and
agencies (MDAs).

Others were 10 per cent from the
logistics sector; six per cent importers and freight forwarders; four
per cent terminal operators; and the remaining 12 per cent simply lumped
into a category referred to as ‘others’.
All the respondents revealed that in
carrying out their businesses in the ports, they had experienced, among
other inconveniences, man-made delays, poor transportation, and
infrastructure and ICT shortcomings.
The report stated that Nigeria’s ports
have seen 3.3 per cent compounded annual growth rate in gross tonnage of
144.2 million within the past five years, and an annual growth of 1.8
per cent is expected until 2021.

It added that notwithstanding this
progress, the United Nations Conference on Trade and Development
(UNCTAD) report indicates that in terms of port and maritime activities,
Nigeria trails far behind many smaller economies in Africa.
Indeed, according to the report, Nigeria
ranks fourth in Africa in terms of TEU volumes. Morocco ranks third,
South Africa second and Egypt first.
The report concluded that there was need
for reforms such as enhancing information exchange on a single window
platform to reduce the presence of multiple ministries, departments and
agencies of the government at the ports and
to limit the spate of human interface in conducting businesses.
Incidentally, the same thoughts and
concerns echoed in Lagos recently at a one-day national workshop
organized by the Lagos Chamber of Commerce and Industry (LCCI) on the
theme: Capacity Building in the Transportation Industry
– The Railway, Maritime and Aviation Sectors.
The well-attended workshop was graced by many dignitaries including Mrs. J.O. Maduka,
chairperson, Science, Energy and Technical Committee of the LCCI in addition to Mr. Babatunde Paul Ruwase, LCCI’s president.

Lagos’ Transportation Commissioner, Mr. Ladi Lawanson, was also in attendance.
On factors militating against building
capacity in all facets of the transportation sector, participants were
unanimous that the absence of a maintenance culture, lack of continuity
and the inability to implement the programmes
agreed upon during conferences.
“Implementation of ideas
to move forward in all gamut of the transportation sector is still zero.
And the authorities who are statutorily empowered to take action must
start to have rethink
and do the needful.
“Government policies, often times, prevent any form of progress, it was also noted.’’
With emphasis on the present state of
Apapa roads which have defied all solutions, they emphasised the need to
embark on an aggressive development of the rail system from the ports
outbound.
They recommended the use of the rail
system to move cargo in and out of the ports is key, if government’s
ease-of-doing-business initiative is to become meaningful.

They recommended that the operation of
the railway system must be private sector-driven to achieve efficiency.
The Nigerian Railway Corporation (NRC) must procure more rolling stocks
to improve her operations in line with the
exigencies of the moment.
As Mr. Zang James, NRC’s Director of
Corporate Planning, who represented the Managing Director, stated that
failure to sustain the tempo of development in this aspect of
transportation is the bane of the industry in Nigeria.

He recalled that during the Abacha
regime, efforts made to revive the railways were scuttled by the same
government that ought to have championed them.
For instance, bringing the rolling stocks
was discontinued. Government did not realize the need to embark on this
as her attention was somewhere else.