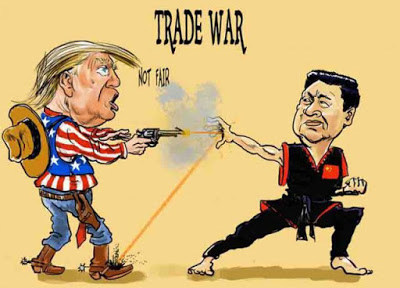 Kenya’s exports to Tanzania rose by
nearly a third in the first five months of the year, giving a clear
indication of the warming up of relations that had threatened to derail
trade between the two nations. Latest data from the Kenya National
Bureau of Statistics (KNBS) show a 28.6 per cent growth in the goods
valued at US$ 100 million that Tanzania imported from Kenya between
January and May this year compared to a similar period in 2017.
Trade relations between the two East
African Community (EAC) countries had been going south in recent years
following the enforcement of a raft of tariff and non-tariff barriers.
The long-running dispute had pushed Kenya’s exports to Tanzania to a
10-year low in 2017. However, the two countries recently announced the
end of the trade disputes. The announcement came on the back of
bilateral meetings between the two countries’ ministry of trade
officials that took place in Dar es Salaam on the behest of President
John Magufuli of Tanzania and his Kenyan counterpart, Uhuru Kenyatta.
More recently, Tanzania and Uganda had
denied duty-free market access for Kenyan-made confectionery, juice, ice
cream and chewing gum. This followed suspicion by officials from the
respective countries that Kenya was using zero-rated industrial sugar
which enjoyed tax incentives thus slanting competition in favour of
Kenyan goods.
A communique signed between the two
countries called for an “effective and timely implementation of
agreements made during bilateral meetings with a view to easing the flow
of goods and services”.
This would pave the way for Kenya to
sell goods such as textiles, which had been locked out of the
preferential access by Tanzanian authorities. Kenya’s textile products,
produced at the Export Promotion Zones (EPZs) were particularly denied
privileged access to the Tanzanian market, with Dar es Salaam moving to
protect its own local textile market. Officials in Dar es Salaam had
argued that the action by Nairobi to allow manufacturers at the EPZs to
sell textile products locally had made it difficult for similar goods
from Tanzania to compete in the Kenyan market. Firms at Kenya’s EPZ are
allowed to sell up to 20 per cent of their finished products in the
local market. Because of the various incentives, such as tax breaks
which these firms enjoy, they are able to sell their products more
cheaply in the market, undercutting competitors that do not enjoy
similar treatment.
Tanzania has traditionally been Kenya’s
second largest market in the EAC after Uganda. Kenya sells a variety of
products such as soap, textiles, palm oil, medical drugs, cooking fats,
iron sheets, sugar confectionery, margarine, cigars, and milk among
others to Tanzania. On her part, Tanzania sells mostly agricultural
goods such as maize, wheat, onions, among others, to Kenya.
Some of the other large trading partners
of Kenya include Pakistan, Netherlands, the UK and the US. Kenya sells
mostly cut-flowers or semi-processed agricultural produce such as coffee
and tea to these countries while importing mostly industrial and
capital goods such as steel, construction machinery, and lubricants
among others.
In the clearest signal that the two
neighbours are keen on casting their trade differences completely aside,
immigration chiefs from the two sides plan to meet to resolve issues at
border crossing points. Senior officials from the two sides will also
jointly tour LungaLunga, Isebania and Namanga, to acquaint themselves
with the flow of trade at these border points.
Revenue authorities from the two nations will also resolve challenges on
the electronic Cargo Tracking system for Tanzanian cargo trucks.The
resolution comes as a major relief to Kenyan manufacturers, whose sales
have been hurt by the trade disputes. When the EAC Common Market
Protocol came into effect in July 2010, Kenya’s export volumes to
Tanzania rose to a record US$383 million (at current exchange rates in
about a year). Several trade disputes in recent years had, however, seen
the value and volume of exports decline to levels before the EAC trade
deal was ratified.