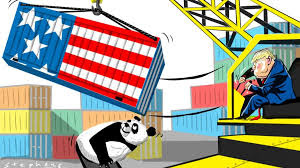 The escalating trade war could be
unfavourable to America’s natural gas exporters as fast-growing buyers
threaten to halt purchase this winter.
1
PetroChina, a unit of the state-owned
China National Petroleum Corp., may suspend its buying of U.S. liquefied
natural gas cargoes during the colder months, just as new American LNG
terminals start up.

The move could force gas suppliers like
Cheniere Energy Inc. to cut prices as they seek to lure other buyers
during the heating season, when demand peaks.
While U.S. LNG companies make the bulk of
their money from long-term contracts, Cheniere last winter reaped big
earnings from the spot market, which saw Asian prices climb to
three-year highs amid booming consumption in China.

The world’s second-largest economy is boosting its use of the fuel as it cuts pollution from coal-fired plants.
But with China eyeing a 25 per cent
tariff on U.S. LNG, Cheniere and other U.S. LNG traders may have no
choice but to sell spot volumes at a discount, Jason Gabelman, vice
president at Cowen and Company LLC, said by telephone
Monday.
Cheniere didn’t immediately respond to a request for comment.
The “U.S. is probably going to have more
spot LNG available than it would have had otherwise if it had been
selling into the Chinese market,” Gabelman said.
Other buyers in Asia may look to take
advantage of low-cost U.S. gas. Cheniere announced Aug. 10 a binding
25-year contract with Taiwan’s state-owned CPC Corp. beginning in 2021.
“If you’re selling gas in the spot
market, you need to find a new place” for cargoes that would have gone
to China, said Nikos Tsafos, a senior fellow at the energy and national
security program at the Center for Strategic and
International Studies in Washington.
“And for companies that only have U.S. gas, that’s a bigger headache.”