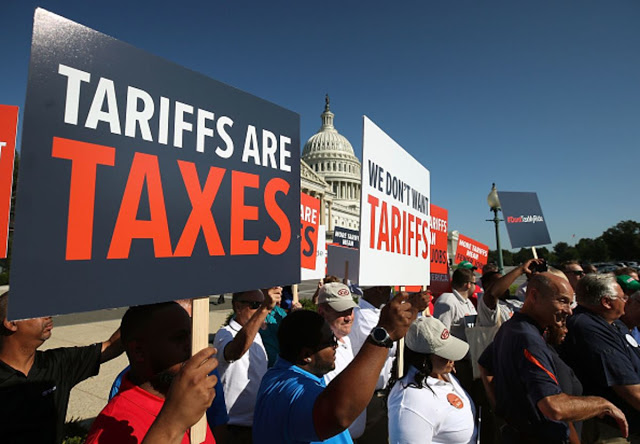 President Donald Trump recently suggested
the removal of all tariffs and non-tariff barriers to global trade.
Sounds intriguing, but free trade is rare and it’s certainly no utopia.
Historically, it’s been largely confined to periods when a major
global power promoted the free exchange of products in its own
enlightened self-interest. That was true of Great Britain in the 19th
century after it spearheaded the Industrial Revolution and wanted to
insure the easy flow of raw materials for its factories from abroad and
foreign markets for their output. After World War II, Americans used
trade to rebuild Western Europe and Japan to counter the Soviets, and
accepted the lack of reciprocity by some of those lands, notably Japan.
This was cheaper and more acceptable in the Cold War era than
garrisoning more American troops around the world and risking more
military confrontations.
The classical foreign-trade theory espoused by English economist
David Ricardo (1773-1823) held that unfettered trade made all trading
partners richer. To Ricardo, even if one country is more competitive in
every area than its trading partners, that nation should concentrate on
the areas in which it has a competitive advantage, leading to mutual
benefits accruing to all economies involved. He used the example of
English-produced wool being traded for French wine.
Subsequently, economists noted that Ricardo’s simple trade model
requires economies in static equilibrium with full employment and
neither trade surpluses nor deficits, and similar living standards.
These aren’t true in the real world. Also, Ricardo didn’t consider
countries at different stages of economic development and different
degrees of economic and political freedom, or exchange-rate
manipulations and competitive devaluations since gold was universal
money in his day.
Ricardo also didn’t factor in trading partners with huge wage
differences, such as exists between the U.S. and China. China can
produce almost any manufactured good cheaper than America, which has a
competitive advantage in almost nothing. The result has been huge and
chronic U.S. trade and current-account deficits. Last year, the U.S.
trade deficit grew 12 percent to $566 billion, the largest since 2008.
Completely free trade is unlikely because countries have vastly
different economies in different stages of development, different
degrees of domestic economic and political freedoms and separate
currencies. To achieve free trade, governments would have to reverse
much of the involvement in their economies and financial markets they’ve
gained since the 1930s. They’d have to surrender considerable
sovereignty to market forces and could no longer keep out imports in the
name of health and safety, either to support local industry or due to
true civic concerns. Where is the dividing line between imported
recreational marijuana and narcotics? Completely free trade would also
require completely free-floating currencies with no government
interference. It’s hard to imagine politicians giving up all that
control.
Still, what would this unlikely utopian world look like? It would
probably be more cyclical without government actions to redress trade
imbalances. In the absence of devaluations, currency controls and other
stabilizing techniques, trade deficits would accumulate in weak
countries. Their currencies would collapse as foreign investors and
locals fled and depleted foreign-exchange reserves. It cost China $1
trillion to accommodate a capital flight in 2014. Political revolutions
would be more frequent and international relations strained as the
strong get stronger and the weak get weaker.
Without China’s demand for technology transfer as the price for
American firms doing business there and outright theft of U.S.
technology, the American trade and current-account deficits would
shrink. More production and profits for Americans would benefit the U.S.
economy, but that current-account deficit provides the liquidity the
rest of the world needs to finance growth, and its shrinkage is highly
deflationary.
Globalization would probably persist due to the continuing vast
differences in the cost of production between developed and developing
countries. Even as Chinese incomes rise, India, soon to overtake China
as the world’s most populous country, has a huge supply of unemployed
and underemployed cheap labor. Ditto other Asian lands.
American consumers would benefit from continuing cheap imports from
low-cost countries, including goods from Asia and legal, accounting and
other services from India. Americans with the skills and knowledge to
compete in a free market world would continue to thrive, but the rest
would suffer lower incomes as globalization wiped out more service jobs
as well as manufacturing positions.
In agriculture, U.S. grain producers would gain from unrestricted
exports to developed and developing economies. Rice exports would lock
out expensive domestic rice from Japan, where that grain is still
considered sacred and imports are severely limited. American farmers
would benefit as European governments are forced to remove GMO
restraints on grain and meat imports. Wisconsin dairy farmers could
export freely to Canada. Canadian maple syrup would decimate Vermont’s
output and free sugar imports would wipe out American producers of cane
and beet sugar that are now protected by import quotas. As a result, the
domestic price is 30 cents pound, compared with 11 cents on the world
market. Unrestrained Canadian timber imports would squeeze American
producers.
The dollar would be stronger as a haven in a volatile currency world.
There would be no currency manipulation to contain the greenback.
This column does not necessarily reflect the opinion of the editorial board or Bloomberg LP and its owners.
A. Gary Shilling is president of A. Gary Shilling & Co., a New
Jersey consultancy, and author of “The Age of Deleveraging: Investment
Strategies for a Decade of Slow Growth and Deflation.”