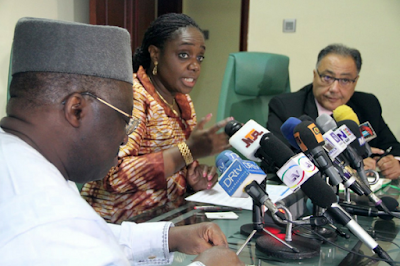 The World Bank has urged the Nigerian government to put
more energy into attracting private sector investments into the economy
and cut down on excessive borrowing.
The warning, again on the rising debt is coming as authorities insist that debt levels remain sustainable.
By end of 2018, Nigeria would have borrowed some N5.839.27 trillion just
in three years to fund the budget deficits with Debt-to-GDP Ratio
currently sitting at about 20 percent, even though it is lower than
standard peer group threshold of 56 percent.
The caution also comes amid concerns that about 40 percent of low income
countries in Sub-Saharan Africa region are already in debt distress or
in high risk of debt crisis.
In an exclusive with BusinessDay, Hafez Ghanem, World Bank new Vice
President for Africa acknowledged that Nigeria needed much resources to
fund development needs, but strongly advised against the present
excessive borrowing by government.
“We believe that in maximizing finance for development, we should do our
best to finance these investments without incurring debt, and it is by
getting the private people to finance investments,” Ghanem stated,
responding to BusinessDay concerns on rising debt.
As contained in the appropriation bill signed by President Buhari in
June, the federal government will borrow N1.643 trillion to partly
finance the N1.950 trillion budget deficit in 2018.
Out of this sum, Government intends to borrow N793 billion from domestic sources and N849 billion from foreign sources.
Ghanem explained that while most governments around the world today are
facing very tight budget constraints, at the same time, there are
financial markets that are quite liquid that could be resorted to for
private capital.
“So, let us attract private sector to finance those investments without
governments having to borrow. So instead of me borrowing to build an
airport, I can get an investor to build the airport and run it, so I get
the service without running into debt.
“This is the one basic way that we are looking at funding development,” he explained.
The World Bank also projects that the Nigerian economy would grow by
around 2 percent in 2018 and expand to about 5 percent in the next three
years, however, a major headwind to the growth prospects is Nigeria’s
over reliance on oil as well as the struggling power sector.
“The oil market continues to be a major risk for Nigeria and it is not
only Nigeria, many countries in Africa are very dependent in commodity
exports whether it is oil, cocoa, so that is really the challenge for
the continent and for Nigeria obviously, the challenge is how can we
remove ourselves from this dependence on commodities and how can come
into the digital economy,” Ghanem said.
The World Bank chief is of the view that to encourage faster growth,
government must invest in three things, including the infrastructure,
human capital as well as a regulatory framework that encourages
entrepreneurship and young people.
Ghanem who resumed last month as the new World Bank Vice President
visited Nigeria which he calls a very strategic country in Africa, to
discuss with government officials and other stakeholders on how the bank
might be of additional help to boosting economic growth not just in the
country but on the continent.
“I started my new position as the vice president for the Africa region
of the World Bank about a month ago and of course I wanted to come as
earliest as possible to Nigeria because Nigeria is a big and important
country in Africa. At the World Bank, our mission is to fight poverty,
to support economic growth and development and that is what we are
trying to achieve in Africa,” he told BusinessDay.
“And obviously given the size and importance of Nigeria, if you want to
fight poverty in Africa, drive economic growth in the continent, we need
growth and development in Nigeria. And so I wanted to come here to
listen to our Nigerian counterparts about their views, about how the
World Bank can serve them best, how the bank can contribute to growth
and development and poverty reduction.”
Speaking further to BusinessDay, the World Bank Vice President also
harped on the need for the government to intensify domestic resource
mobilization rather than increase debt.
“The other aspect that when we look at with regards to the whole
financial sustainability and the capacity of countries is domestic
resource mobilisation, how can you mobilize more resources domestically
through your tax system rather than increasing debt.

“So those are the two areas that we have been working with the
countries in the region, attracting investments so that governments do
not have to spend and also helping governments put in place systems so
that they can raise more resources domestically.