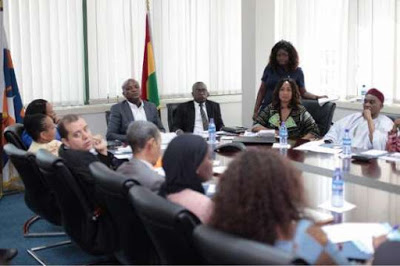 The purpose of the meeting was to stress the importance of diplomatic
involvement in promoting regional trade and to discuss how embassies
could work directly with trade promotion agencies, such as the World
Trade Centre Accra, to increase trade and investment between their host
and home countries.
The meeting was on the theme: “The Role of Diplomacy in Promoting Intra-Africa Trade.”
Togbe Afede XIV, the Executive Chairman of the WTC, Accra in his
welcome address stressed the importance of population size and compared
Africa’s size in terms of population and market, to that of Brazil,
Russia, India, and China (BRIC) and emphasised on how Africa could learn
from other trading blocs such as the European Union.
Togbe Afede who is also a Board Member of World Trade Centre’s
Association (WTCA), stressed that Africa could leverage on its size to
generate significant economic benefits for the entire continent.
Madam Pavelyn Tendai Musaka, the Zimbabwe High Commissioner to Ghana,
in her opening remarks said: “The private sector has led the way when
it comes to trade and investment, but ask what the role of the
Ambassador and the embassy are?”
She described the Zimbabwe High Commission’s relationship with WTC
Accra, as encouraging and her role in working with the Centre to
organise and take part in two trade and investment missions to Zimbabwe
in May and June this year.
Madam Musuka hoped that the trade and investment visits to her
country would generate investment in Zimbabwe’s agriculture, power,
mining, banking and finance sectors, and also lead to the establishment
of WTC in Harare.
Dr. Alhousseini Ousmane, Niger Ambassador to Ghana, commended WTC
Accra for the initiative and expressed their support for WTC’s expansion
in Africa, and the continued collaboration amongst members of the
African Diplomatic Corps to promote regional integration.
Mr Edward Ashong-Lartey, Director of Investment Services at the Ghana
Investment Promotion Centre, corroborated Madam Musaka’s message,
stating that,  “We all know that trade and investment go together.
First, we must produce, and then, we must trade.  Now with the signing
of the Continental Free Trade Agreement, government and the private
sector must work together to promote trade and investment in Africa.”