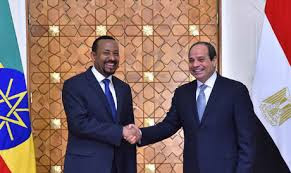 A unified
stream of thought. (The Egyptian Presidency/Handout via Reuters)
Ethiopia’s
prime minister has sworn not to “harm” Egypt’s share of the Nile, breaking the
deadlock in talks over control of Africa’s longest river.
During a
trip to Cairo over the weekend, prime minister Abiy Ahmed said the countries
made progress on sharing the Nile’s waters and would put together an agreement
to set up a mutual fund for infrastructure development. In a joint press
conference, Egyptian president Abdel Fattah al-Sisi also made Abiy swear to God
that he won’t “hurt” (0:27 in Arabic) Egypt’s quota of the waters, which the
premier repeated amid laughter and applause from the attendants.
“My government
and my people have no intention to harm the people of Egypt and the government
of Egypt. We will work with the people of Egypt in any area,” Abiy said.
Abiy’s
charm offensive comes just months after talks reached an impasse over a
mega-dam Addis Ababa is building along the headwaters of the Blue Nile, one of
the Nile’s two major tributaries. The $4.8-billion Grand Renaissance Dam will
be Africa’s largest hydroelectric dam and will produce 6,000 megawatts of
electricity. As a downstream nation, Egypt says the dam will disrupt the flow
of the Nile to its almost 100 million people, potentially crippling agriculture
and industry. This will also compound other problems threatening the Nile,
including climate change, population boom, urban sprawl, and rising sea levels,
which lead to saltwater intusion
His trip
to Cairo is part of Abiy’s push to open up the political and economic systems
in Ethiopia. Since coming to power in April, he has announced domestic,
foreign, and pro-business stances that could radically reset the trajectory of
Africa’s second-most-populous nation. Abiy also called for peace with long-time
rival Eritrea, secured release of thousands of Ethiopian detainees lingering in
Egyptian and Saudi risons, and promised to oversee a foreign policy based on
mutual interest and mending strained ties in the region and beyond.
Taking an
emollient approach to differences and dealing quickly with both pressing
domestic and foreign stability concerns will only help solidify Abiy’s
influence, says Ed Hobey-Hamsher senior Africa analyst at risk consultancy Verisk
Maplecroft. “This bodes well for Abiy’s political and economic reform program.”