Passengers including hundreds of Nigerian on board Air France
operated commercial Aircraft from and to Lagos and Abuja have since
Wednesday been stranded at Charles De Gaulle International Airport,
Paris.
The News Agency of Nigeria (NAN) reports that many of them have had
to sleep at the airport from Wednesday owing to what the management of
the airline claimed as malfunctioning of their planes and lack of
aviation fuel. 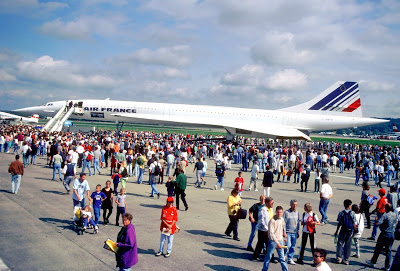 Some of the passengers had left Lagos and Abuja for various
destinations while many were returning to Lagos from various countries
en route the Charles de Gaulle Airport in Paris.
Air France, which said their planes could not fly, were scrambling
for hardly available seats in other airlines in alliance with them to
fly the passengers to their destinations.
Many of the passengers, who in their bookings had about three to five
hours layover in Paris were left stranded spending 17 to 48 hours at
the airport.
Some, who were lucky to get the seats in the allied airlines were
rerouted and had to spend additional several hours to get to their
destinations.
Many of the passengers complained of ill treatment and alleged
violation of standard aviation regulatory operations against the
airline.
Olagunju Ojo and Afolake Arikewuyo, who are in their late 70s, said
they left the U.S for Lagos en route Paris on Tuesday only to be left
stranded at the airport.
The women, who could barely speak English and do not understand
French, were in the long queue unassisted while struggling to get their
cancelled flight to Lagos rerouted.
They said they had arrived the airport for over 12 hours only to be
told that their flight to Lagos had been cancelled and there was no
alternative arrangement for the day.

Mrs Ojo, who spoke in Yoruba language, said: “We cannot go to Lagos
today and there is no Schengen visa to take us outside the airport to
sleep.
“They said we will sleep at the airport here and there is no way to
communicate with my people waiting for me at the airport at home and
those I left in the U.S,” she said.
Another passenger, Theresa Fashida, also an elderly woman, said she
left Ireland for Lagos en route Paris and had been at the airport for
eight hours struggling to see how her cancelled flight could be
rerouted.
Mrs Fashida said the airline later succeeded in rerouting her flight
through Nairobi, Kenya from where she would travel to Lagos with Kenyan
Airway the following day.
“The flight from Paris to Nairobi is tomorrow, that means I have to
sleep at this airport because there is no hotel accommodation provision
for me and I do not have Schengen visa.
“I did not book Nairobi flight; I don’t know why they should make me to pass through these pains with my age.
“You can see, this is the only pack of food given to me since I
arrived at this airport and even their airline officials are not
friendly at all,” she said.
Some other Lagos bound passengers were rerouted to South Africa to fly South Africa Air from Johannesburg.
NAN reports that some of the passengers, who left Lagos for official
engagement in Washington DC, were also left stranded at the Charles De
Gaulle Airport.
The passengers, among who were journalists, had departed Murtala
Mohammed International Airport on Tuesday at about 11 p.m. on board
Airbus 340-800 Flight AF109 and arrived in Paris at about 6.30 a.m.
Wednesday.

With a scheduled flight from Paris to Washington at 12.30 p.m. on
Wednesday, they were supposed to have a layover of about six hours
before departure.
However, at 3 p.m. after about eight hours of waiting at the
departure hall, the airline officials announced a technical fault on the
Airplane, Airbus A380-800 Flight Number AF0054 prepared for the
journey.
The operators announced that their team of engineers and other staff
were working on the aircraft and also expected to overcome the challenge
of fuel before take-off.
After several more hours of waiting at the lounge, the officials
announced a cancellation of the fight at about 6 p.m. owing to the
purported technical fault and shortage of aviation fuel.
They directed the passengers to a point for possible flight
rescheduling which they said could not be able to accommodate the 500
passengers on board the botched flight.
At the flight rescheduling counter where passengers had converged,
there were many Nigerians with series of complaints, with a few number
of the airline staff to attend to them.
After hours of waiting, some of the Washington-bound Nigerian
passengers including the journalists were rerouted for Thursday flight
through Heathrow London on board Virgin Atlantic operated Airbus
330-300.
The flight from Paris to Heathrow airport was scheduled for Thursday
7.30 a.m. while the Virgin Atlantic Washington bound flight was for 11
a.m. also Thursday.
All efforts to convince the Air France officials for an earlier
flight to enable those scheduled for a conference to be held Thursday at
3.30 p.m. in Washington fell on deaf ears.
Confronted with the challenge of where to pass the night, the airline
officials said without a valid Shenghen visa to take the passengers to
hotels outside the airport the option was to sleep at the airport.
Many of the passengers had to sleep on the floor and few available
seats at the resting lounge of the airport and there was no provision
for dinner for them.
At the lounge, Niyi Oginni, who slept on the floor with his wife, narrated his ordeal after spending 17 hours at the airport.

He said their Air France’s Abuja to Atlanta flight was delayed from
Tuesday to Wednesday only to get to Paris and there was no connecting
flight.
“Our stop over was supposed to be for five hours but we have spent 17 hours here waiting to connect a flight to Atlanta.
“You can see what they subject us to after paying so much, no food, no place to lay our heads.
“It is so embarrassing, I saw a woman also from Nigeria at the other
lounge sleeping on bare floor with her four children,” he said.
Mr Oginni said he had gone through the internet to find out redress option left for him and other passengers.
“The EU Complaint Form on Air Passenger Rights provides compensation
in the event of overbooking and cancellations of flight and I am going
to explore it.
“From what I read on the site,  passengers on cancelled flights are entitled to 250 Euro for all flights of 1500km or less.
“Passengers are also entitled to 400 Euros for all flights between
1500km and 3500km and 600 Euros for all other flights more than 3500km.
“Compensation shall be paid in cash, if the passengers accept; it can also be through travel voucher or others services.
“The right to assistance also applied for passengers on long delays,
in meals, refreshment, hotel accommodation and free phone calls,” he
quoted the site.
Mr Oginni, who said he was going to file the report, enjoined other
passengers who cannot go to court not to sleep on their rights.
On his part, Stanley Nwosu of Federal Radio Corporation of Nigeria
said the inhuman treatment meted to the passengers was unacceptable.
“No provision for accommodation and no place to refresh. Since we
arrived here, we were given only 11 Euro food vouchers which could only
fetch you a burger and a bottle of water.
“For two nights, I can neither take my bathe nor change my dresses,
which are already in my checked in luggage, because I was not envisaging
this delay.
“It is even more disheartening that we are going to miss the
assignment we left Nigeria for, in Washington and there is no remorse
from the airline,” he said.
As envisaged by many of the passengers, Air France, despite
assurance, failed to accompany the luggage of the passengers on rerouted
flights with the aircrafts.
Meanwhile, attempts to get official response from the airline proved
abortive as those approached said they were not authorised to speak on
behalf of the organisation.