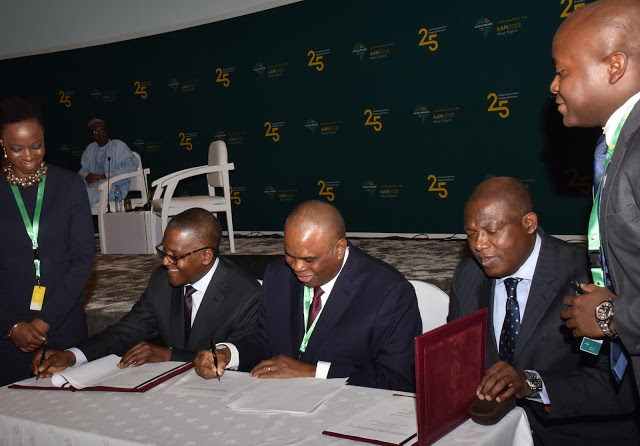 African Export-Import Bank (AFREXIMBANK) on Saturday facilitated a
$1.4 billion syndicated loan to two Nigerian entities to promote
industrialisation and development of small and medium enterprises (SMEs)
in the country.
The agreement for a $750 million loan was signed by the managing
director/CEO, Bank of Industry (BOI), Olukayode Pitan, while President
of Dangote Group, Aliko Dangote, signed the $650 million facility for
Dangote Group.
The BOI, facility solely arranged by AFREXIMBANK and fully subscribed
to by a syndicate of international banks, is to support the development
impact of BOI in promoting its activities with SMEs.
For Dangote Group, the $650 million loan was in favour of the ongoing
600,000 barrels per day capacity Dangote Refinery being built in Lagos.
AFREXIMBANK President, Benedict Oramah, said the structure of the BOI
facility is for three year term with a one-year moratorium period, and a
repayment period in equal quarterly installment after the moratorium
period. The interest on the loan would be paid quarterly through the
lifespan of the loan.
The Dangote loan is structured as a seven year term facility,
inclusive of a five year moratorium, with interest to be paid quarterly
on the outstanding principal throughout the moratorium period. The
principal facility would be repaid over two years in four equal parts on
a yearly installment after the moratorium period.
The refinery scheduled to commence operation next year is expected to
refine Nigerian crude blends into petroleum products for domestic and
export markets.
The signing of the two agreements was witnessed by President
Muhammadu Buhari at the opening of the annual general meeting (AGM) of
the Bank held in Abuja. The AGM came as a climax of a four–day schedule
of meetings to mark the 25th anniversary celebrations of the Bank.
In his speech to declare the AGM open, President Buhari described the Bank as the celebration of true Pan African success story.
He said the 25th anniversary of the Bank clearly demonstrates to the
world that Africa can create and maintain a world class organization.
“Since inception, AFREXIM Bank has grown to become a global
powerhouse for the development, facilitation, promotion and financing of
African trade.
“Africa’s journey to prosperity can only be achieved by supporting
inclusive and sustainable projects. We must therefore congratulate and
continue to support AFREXIM Bank to deliver on this mandate,” he said.
President Buhari said his administration adopted a policy of
inclusive economic growth and was determined to attain this goal by
reducing the country’s over reliance on crude oil.
So far, he said the country has invested aggressively in
infrastructure to support the country’s growth potential in agriculture
and solid minerals.
He said the country has also empowered many Nigerian entrepreneurs in the entertainment and digital economies.
The President noted the unique and important Nigeria has to play role
in Africa, pointing out that apart from its 200 million people,
diversity of language, culture, natural endowments and aspirations, the
country was a trading nation.
“No nation can survive on its own. Trading is important and the terms
of trade are important. Therefore, there is a need to ensure our
national interests as well as our regional and international obligations
are balanced.
He said he has directed relevant agencies to conduct intensive and
extensive consultations across the nation on the Continental Free Trade
Agreement (AfCFTA), which Nigeria is among the few countries yet to
sign.
In his report on the activities of the Bank in 2017, Mr Oramah said
AFREXIMBANK in collaboration with the African Union, has begun the push
to tackle the challenges of access to trade information in Africa by
launching an initiative to host intra Africa Trade Fairs to hold once
every two years.
The first of such trade fairs would held in Cairo, Egypt in December.
He described 2017 as a good year, as part of its goals is to be the agent of positive change in the life of Africa.
Despite the difficult operating environment, he said the Bank made
good progress through good vision, innovation, prudent resource
management and determination to deliver positive results to our
shareholders.
Apart from revenues growing by 25 per cent to $645million, he said
net income rose by 34 per cent to a new record of $220 million.