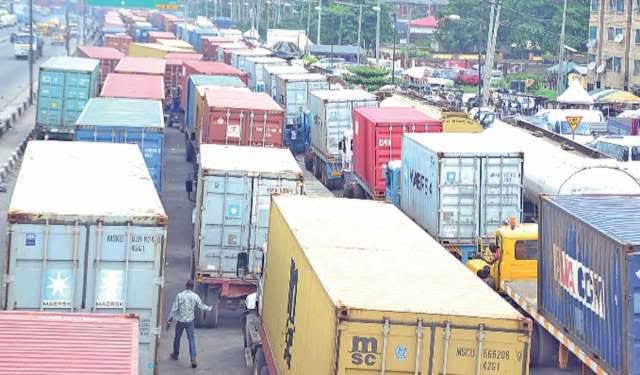 The Federal Government says it has concluded plan to engage relevant stakeholders to address the persistent gridlock at the nation’s ports.

Rep. Victor Akinjo, Chairman, House of Representatives Committee on Privatisation and Commercialisation, made this known on Thursday during the committee’s tour of facility at the Ocean and Cargo Terminal in Warri.

Akinjo said that the gridlock cost Nigeria about N600 billion monthly which he said was a huge lost.

“When we interface with importers and exporters in Lagos, we discovered that the gridlock is costing Nigeria N600 billion monthly.

“We took it up on Wednesday at the level of the parliament; we want to engage all stakeholders to see what can be done urgently,” he said.

The committee chairman said the purpose of the visit was to interface with the maritime operators and regulators.

“Port is the gateway to any economy in the world. You cannot carry tonnage of goods through the air, it must come through the water.

“The only way to achieve this is to ensure that our ports are efficient and effective.

“The essence of the visit is to interface with the operators and regulators and take on issues I called “privatisation laboratory” and find ways to solving the issues,” he said.

Akinjo commended the management of Ocean and Cargo Terminal, urging them to aggressively pursue delivery on its obligations as contained in the agreement.

“The committee under the Speaker of the House of Assembly, Rep. Femi Gbajabiamila, in concurrent with our legislative agenda, are very concerned that there must be fairness, justices and financial equity in things we do.

“We will not allow your investment to go down the drain nor allow the regulators to over task you. But more importantly to allow Nigerians to benefit from every transaction,” he said.

Responding, Mr Olatunji Olusinde, the Executive Director (Legal Unit)/Secretary, Ocean and Cargo Terminal, said that the company would create about 300 direct jobs when it comes on stream.

Olusinde said that skeletal operations would commence in January 2020.

He appealed to the Federal Government to fast track the dredging of the Escravos water channels to allow navigation of bigger vessels.

“The real port terminal operations cannot commence until the channel is dredged.

“Only lighter vessels and barges can come in now and those are not commercially viable for terminal operators.

“So, we are appealing to the government to hasting action on the dredging of the channel.

“This port is strategic, a gateway to the East, North and the Middle belt. Beside, it will ease the burden of congestion the we are witnessing in Lagos,” he said.

In his remarks, the Delta Port Manager, Mr Okeke Okeke, said that the port would create a multiplier effect when it runs optimally.

“Majority of the importers in Nigeria are from the North, Middle Belt and Eastern parts which is out of catchment areas.

“They said that if the port runs optimally, they will divert their attention to this port because of proximity and other reasons,” he said.

Okeke, however, said that the port was in synergy with the Nigeria Navy and the host community to ensure adequate security.

Firms in England to pay for disposal of waste

Banks not barred from investing in bills – CBN