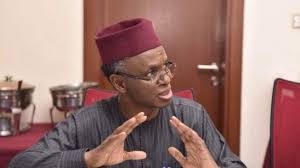 Governor Nasir El-Rufai of Kaduna State has backed the Federal Government’s closure of Nigeria’s land borders and remarked that it was unfair for smaller countries to be sabotaging a big country like Nigeria.

El-Rufai who was a special guest at the graduation of Senior Course Three of the Nigeria Customs Command and Staff College, Gwagwalada, Abuja on Friday said the step taken was commendable.

He explained that Nigeria like any other country like to trade with other countries but added that there must be fairness.

The governor noted that closure of the borders should be sustained until there were established deals that covered every country.

“The partial closure of borders is highly commendable. Nigeria is the largest country in West Africa and the continent and it is clear that our neighbours are using our openness and brotherhood to trade, to exploit us.

“I fully support and subscribe to the closure of borders and we should sustain it for as long as possible.

“We need to do this for our country to have a fair deal and for our manufacturers to be protected.

“All those talking about free trade or preaching about it today closed their borders for centuries and decades ago.

“Nigeria must grow its own internal capacity, we will not do so if we allow our neighbours to use the porosity of our borders to sabotage our economy,’’ he explained.

El-Rufai, however, commended the physical development at the customs command college in Gwagwalada.

He lauded the effort of the current customs boss for his reform agenda.

“I am impressed with what I have seen on ground in terms of physical development as well as the content.’’

﻿Africa can be net exporter of agric products