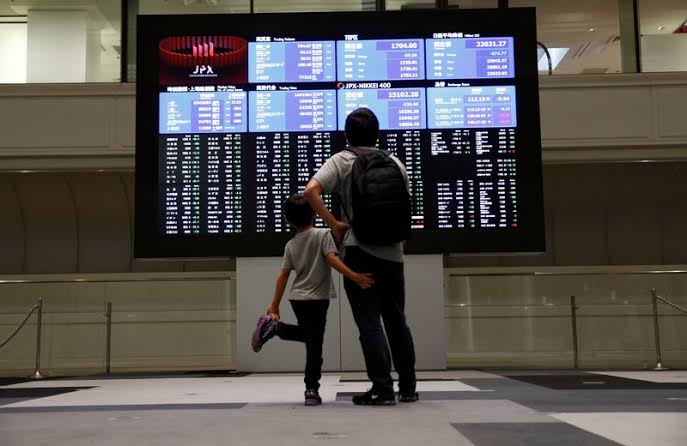 Asian shares jumped on Friday after U.S. President Donald Trump said he would meet with China’s top trade negotiator, stirring hopes for an agreement, while sterling resumed its climb amid optimism over a possible Brexit deal.

Australian shares climbed 0.9 per cent, while Japan’s Nikkei stock index gained 1.1 per cent. Chinese blue-chips were up nearly 1 per cent after a slow start.

The bullish market mood came after a first day of trade talks between top U.S. and Chinese negotiators, characterized by Trump as “very, very good.”

A White House official said the talks had gone “probably better than expected” and a U.S. Chamber of Commerce official briefed by both sides raised the possibility of a currency agreement this week.

Even before Trump’s comments, hopes for an agreement helped to lift U.S. markets.

Further positive developments in trade talks could boost markets on Monday, but low expectations for a deal mean that the lack of an agreement would not “necessarily (be) the end of the world for risk,” he added.

Analysts at National Australia Bank said freezing tariffs at current levels would be unlikely to reverse the trade-driven slowdown in economic growth.

“The uncertainty around unresolved structural issues such as IP (intellectual property) theft and subsidies to state owned enterprises are likely to remain deterrents for a pick-up in much needed capital expenditure.

On this score details on a potential currency pact will be important,” they said in a morning note.

The pound, which had earlier given up some of the previous day’s gains, turned higher, adding 0.1 per cent to 1.2455 dollar.

The dollar index .DXY, which tracks the greenback against a basket of six major rivals, was down at 98.636 after posting its biggest daily drop in five weeks on waning safe-haven demand for the currency.

The British pound had jumped nearly 2 per cent on Thursday, its biggest daily gain since March, after Irish Prime Minister Leo Varadkar said a Brexit deal could be clinched by the end of October after what he called a very positive meeting with his British counterpart, Boris Johnson.

The move away from safe havens also lifted the yield on benchmark 10-year Treasury notes US10YT=RR to 1.6699 per cent compared with a U.S. close of 1.656 per cent on Thursday.

Yields rose across the curve, with two-year notes US2YT=RR yielding 1.5486 per cent compared with a U.S. close of 1.53 per cent.

In commodity markets, oil prices extended gains on news of an explosion on an Iranian tanker in the Red Sea.

Prices had climbed earlier after the head of OPEC said the organization could take action to balance oil markets, including a deeper cut in oil supplies, and amid hopes that progress toward ending the U.S.-China trade war could help to revive economic growth and lift fuel consumption.

Global benchmark Brent crude LCOc1 was up around 2 per cent at 60.29 dollars per barrel.

Gold, which had found its appeal tarnished by rising risk appetite, recovered some ground, with spot gold XAU= trading up 0.1 per cent at 1,495.63 dollar per ounce.