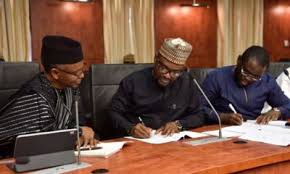 She made the appeal at the Roundtable Session on Service Delivery at the Nigerian Ports, with the theme, ”Towards Standard Operating Procedures that Work in Nigeria’s Sea Ports and Terminals”, in Lagos on October 8, 2019.

The session was organised by the Maritime Anti-Corruption Network (MACN) represented in Nigeria by the Convention on Business Integrity Ltd. (CBI), with the support of the Danish International Development Agency (DANIDA).

TUGAR initiative is part of the federal government’s policy to design country specific strategies to monitor and evaluate anti-corruption and other governance initiatives, and to implement corrective actions as needed.

Ekeanyanwu, who was represented by Mrs Bosede Oguntuberu, said that the unit had instituted a harmonised single operating procedure for the portal to help address issues and checkmate corruption in the ports.

She said that a Single Process Card that would address the dos and donts for vessels coming into the country would soon be released.

According to her, the measures are to ensure that the country’s ports are more effective, free of corruption and transparent in their services.

Also, Mrs Raseedat Okoduwa, Director, Public Enlightenment Department and Spokesperson of the Independent Corrupt Practices Commission (ICPC), urged the everyone to join hands to have progress in the port.

She said that the ICPC was also monitoring the portal to checkmate corruption.

Addressing the issue of standard, Mr Vivek Menon, Head, Collective Action and Partnerships, Europe, the Middle East and Africa, MACN, said that collective action would create an efficient environment for everyone.

According to him, the premise of the session should be to raise awareness on the work that local authorities are doing as regards ensuring that things are done in good standard procedure in the ports.

“Maritime should be transparent for the benefit of all in the society, and so there should be constant updates on the proceedings in the port.

“There should be collaboration with government and locals, with information passed freely; and this will help in the ease of doing business with standard procedures,” he said.

Menon said that there was need to have a single pamphlet that would contain information of the port for shippers, so that they would not run contrary to proceedings and reduce corruption in the port.

In his own contribution, Mr Olufemi Awoyemi, Chairman, Proshare, said that the nation’s economy was tied to the country resolving the port issues that were on ground.

According to him, there is need to streamline operations at the ports to have an incremental progress.

Also, Mr Soji Apampa, the Chief Executive Officer of CB,  said that the port was saddled with many challenges that were affecting its being run effectively.

He said that for the challenges to be curtailed, there should be communication between stakeholders, compliance with standard, and need for the type of network that operated in MACN to operate in Nigeria.

Apampa said that they would ensure that the communique reached in the session was presented to the Vice President for consideration.

Africa: CFTA is Too Important to Fail – Kagame

Sudan receives half of $3bn aid from Saudi, UAE