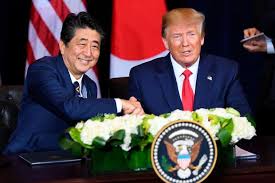 The pact was signed by Japan’s Ambassador to the U.S. Shinsuke Sugiyama and U.S. Trade Representative Robert Lighthizer at the White House on Monday.

Washington reached the deal with Tokyo amid its year-long trade war with Beijing.

The deal, which was initially announced by Japan and the U.S. last month, includes increased access to Japanese markets for American agricultural producers.

Trump said on Monday that the deal will be a “game changer for our farmers and our ranchers” providing them with “significantly enhanced access to a critical foreign market.”

Trump pulled the U.S. out of the Trans-Pacific Partnership (TPP) trade accord, which took effect among 11 countries, in Dec. 2018, and now hopes to put the new pact with Japan into force on January 1.

According to the U.S. Trade Representative (USTR), Japan will reduce tariffs on 7.2 billion dollars’ worth of US food and agricultural products, including American beef, pork and wheat, while eliminating tariffs on almonds, walnuts and other goods.

Despite the deal, a threat of the U.S. imposing car tariffs on Japan remains.

The deal comes as Trump has struggled to finalise more complete trade deals with a number of key commercial partners, including Europe, China and neighbours Mexico and Canada.