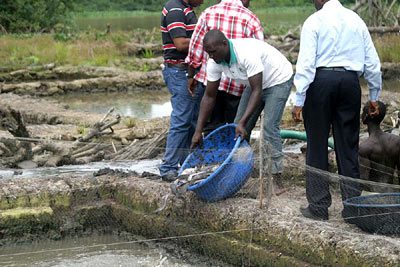 The Federal Government has announced plans to unveil Commercial Fishing Cluster for 9,000 Micro, Small and Medium Enterprises (MEMEs) in Kebbi.

Nigeria’s Vice President, Prof. Yemi Osinbajo, made this known at the launching of National MSMEs Clinic and TraderMoni scheme in Birnin Kebbi.

“The commercial fishing cluster will be inaugurated next year (2020) in Kebbi, where over 9,000 MSMEs will benefit in the state,” he said.

According to Osinbajo, Federal Government will establish a minimum of one cluster for each state, while the project will be part of the next level’s project.

“In the next level project, we have what we call ‘Share Facilities’ for MSMEs.

“We are trying to have 37 clusters across the nation.

“This will provide MSMEs the opportunities of working in an equipped cluster where they will have specific facilities for entering into the production of their products.

“For example, a share butter cluster, people who use share butter for their project will be given the facilities where they can process their butter, package it;

“The government will provide the equipment and all that to make it easy for them, because a small producer may not be able to buy the equipment they need,” he said.

According to him, the federal government intends to establish 37 clusters and has done three already.

He said the move was in furtherance of the government drive to promote the growth of small businesses across the country.

“Kebbi is the 24th State to host the clinic since its commencement across the country in 2017 where over 400,000 small businesses have been directly impacted.

“The MSMEs Clinic is an initiative aimed at driving the growth of small businesses by creating the necessary linkages between government regulatory agencies and prospective and existing micro enterprises,” the vice president said.

Osinbajo also warned business regulating agencies against making business difficult for the MSMEs in the country.

“The business regulators should be business facilitators to MSMEs and not tax collectors.

Earlier, the Special Assistant to the Vice President on MSMEs, Mr Tola Adekunle-Johnson, said the federal government had created over 300,000 SMEs in the last three years through direct contact and reduction of businesses registration by 50 per cent.

“The responses we are getting from these entrepreneurs are fabulous because, the vice-president has reached out to over 400,000 SMEs through his office;

“A lot of people have gotten their businesses registered, sent for training and participated in exhibitions outside the country,” he said.

Adekunle-Johnson added that through continuous public enlightenment, the MSMEs would realise that there were many business opportunities for them across the country, which the Federal Government has provided.

Earlier, Gov. Atiku Bagudu of Kebbi expressed gratitude to Osinbajo for the launching of the National Micro, Small and Medium Enterprises clinic in the state.

“Kebbi, by both history and culture, is an entrepreneurial state, there is hardly any commercial centre in Nigeria that does not have somebody from the state,” he said.

Bagudu, also said his administration had provided funding support for some SMEs as the fishermen, butchers and women associations to boost their businesses.