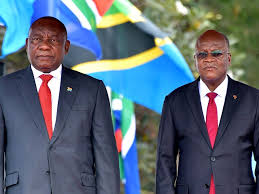 South Africa  and Tanzania are finding a common ground to deepen and strengthen economic ties through expanded trade and investment.

The goal of the countries  is to provide decent livelihoods for their citizens through robust trade.

President Ramaphosa was also in Tanzania to attend the 39th Ordinary Summit of SADC Heads of State and Government.

During their bilateral discussions, Ramaphosa and Magufuli exchanged views on bilateral, continental and global issues, reaffirming their commitment to cooperate more closely on multilateral issues.

“I firmly believe that much can still be achieved to further expand our cooperation, particularly in sectors such as energy, mining development, mineral beneficiation, economic infrastructure, tourism, agro-processing, education and healthcare,” said President Ramaphosa.

He also encouraged the enhancement of cultural exchanges in order to promote people-to-people relations.

The two heads of state also agreed that the second session of the South Africa-Tanzania Binational Commission would be hosted in South Africa this year, on a date to be agreed.

They also noted with satisfaction the coming into effect of the Africa Continental Free Trade Area (AfCFTA),  an ambitious initiative to accelerate intracontinental trade and advance economic integration.

Ramaphosa and Magufuli also addressed the South Africa-Tanzania Business Forum and urged their respective business communities to work together to achieve inclusive growth and development.

It was also agreed that in order to promote rapid industrialisation and development, there was a need to enhance the ease of doing business in the two countries.

“South Africa is ready and prepared to craft a new partnership model with Tanzania, where government and business work together to clear the way for more investment to flow between our two countries,” added Ramaphosa.