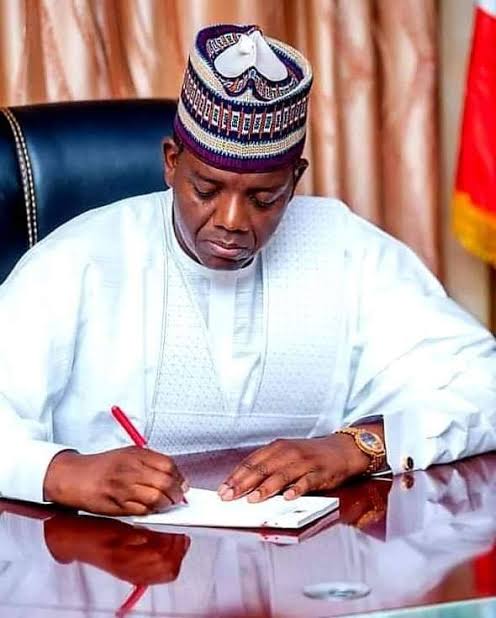 Governor Bello Matawalle of Zamfara has confirmed he received a draft cheque of N282.5 million from the Assets Management Corporation of Nigeria (AMCON) being excess money recovered from auction of the state government’s properties.

Several state government’s moveable properties were auctioned by AMCON at different times under the leadership of ex-governor Abdulaziz Yari.

Malam Yusuf Idris, the Director-General on Press Affairs to the state governor, said that Matawalle was presented with the cheque by AMCON’s Intergovernmental Relations Officer, Mr Saad Ahmed in company of the corporation’s Head Legal Department, Mr Albert Nwanzie.

He said the covering letter to the cheque dated August 16, 2019, read in part: “Re-Refunds of excess funds recovered following court judgement in AMCON VS BRIGHTWAY mining and minerals Ltd and 2 others- Suit No FHC/GS/CS/2014 forwarding of original drafts.

“Please find attached the following twenty-nine (29) original drafts totalling 282,525,547,38 in respect of refunds to Zamfara State Government on the settlement sum received in respect of liquidation of the debt of brightway mining and minerals Ltd to AMCON”

Receiving the draft cheques on behalf of the Zamfara Government,  Matawalle said his administration would continue to revisit all auctions made on behalf of the state government with a view to recover all funds that were wrongly or illegally deducted from the state by banks, companies or AMCON.

Matawalle was quoted to have wondered over the way and manner government assets were auctioned under the previous administration over its failure to repay little debts.

He further said that the refunds made to the state by AMCON was a positive response to a letter, which he earlier sent to the corporation requesting it to refund the said amount to the state because the money realised from the sales of the state government’s assets was more than the debts.

The governor also promised to continue to pursue all the auctioned properties until all the funds were recovered.