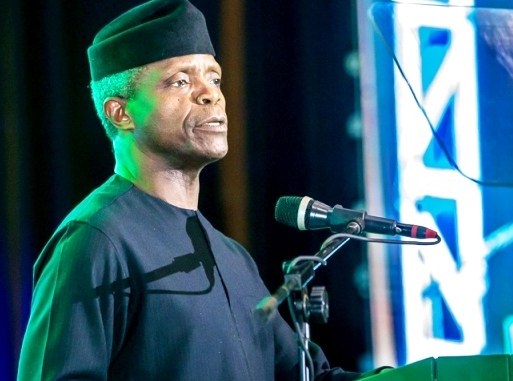 Vice-President Yemi Osinbajo has reassured Nigerians that Federal Government was committed to ensuring effective and cost reflective power supply in the country.

According to Osinbajo, this commissioning is an important part of  government effort to improve supply and quality of power to homes and businesses in Nigeria.

“In past few years, resolving the power problem has been top priority of government of Nigeria.

“Today, we have about 13,427 megawatts installed capacity and available capacity of 8,342 megawatts.

“This was achieved through the effort of government and private sector partnership on rehabilitation of turbines in Shiroro Egbin, Delta, Sapele, among others,” he said.

He assured Nigerians that before the end of 2019, new generation was expected to be injected into the national grid to boost and increase power supply in the country.

Osinbajo said the distribution capacity in the 11 Discos were significantly low, hovering at around 4,000 megawatts on average with a peak at about 5,400MW.

He added that despite all the availability of about 8,000MW of generation and 7,000MW of transmission capacity, the lack of Disco infrastructure to absorb and deliver grid power to end-users had  largely restricted generation to an average of about 4,000MW, and sometimes even falling below 4,000MW.

“It is evident that despite all efforts that has been put into trying to expand the grid, the structure of the market today cannot deliver on government’s promises to provide power for domestic and industrial use.

“What we have done in the past has taken us to a point where there is clearly a change of strategy,” he said.

The Chief Executive Officer of the NDPHC, Mr Chiedu Ugbo, said he the new 2×60MVA, 132/33KV substation of Abeokuta, when fully come on stream, would provide reliable power off-take via six 33KV distribution feeders to the state capital (Abeokuta) and its environs.

He explained further that the 1×60MVA transformer at Otta would  provide additional power supply via three 33KV feeders to Otta and its environs.

Besides, Ugbo underscored the importance of the projects and said they would impact positively on power supply to Abeokuta, Otta axis and Papalanto.

“NDPHC’s contribution to the tansmission grid system has transformed the hitherto radial 330Kv/132KV grid into a more robust grid system with significant provision of alternative power flow routes which now serve as redundancies and which has resulted in a more reliable and stable Nigeria grid.

“Of note in these respects are the commissioning of the over 220KM long 330KV Double Circuit (DC) lines providing alternative supply route into Abuja and the FCT from Geregu.

“Through a new Lokoja substation, a new Gwagwalada substation into the existing TCN Katampe and Apo substations with several significant expansion works on existing substation developments along this route,” he said.