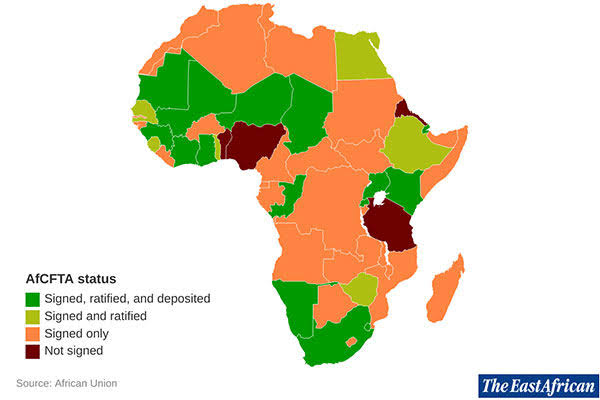 The countries that have signed up to the African Continental Free Trade Area (AfCFTA) agreement have until July to work out the details of how it will work.

This is coming as the agreement took effect early on Friday but Nigeria and Benin have yet to sign the agreement.

It is only from July that they will start to see what difference it could make.

The AU’s commissioner for trade and industry Albert Muchanga celebrated the news on Twitter.

So far, only 24 African countries out of 54 have ratified the trade agreement with, among others, Africa’s largest economy Nigeria yet to sign.

Burkina Faso became the latest country to join when it signed up on Wednesday.

The agreement is aimed at creating a single continental market for goods and services with free movement of goods, people and investments, similar to the European Union.

Experts say it will boost trade in Africa and strengthen the continent’s position in global trade.

The UN’s Economic Commission for Africa estimates that the agreement has the potential to boost intra-Africa trade by 53 per cent.

Currently, Africa trades far less with itself than it does with the rest of the world.

The African Union says if all countries signed up it would become the largest free trade area since the formation of the World Trade Organization.